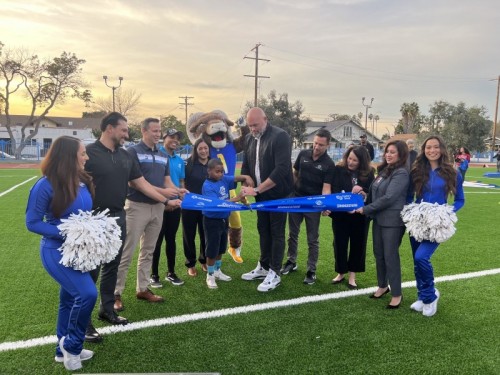 More than a Playing Field

The award named after the late NFL hall-of-famer known for his community philanthropy comes with $250,000 for the winner to donate to charity, Whitworth donated his prize money to the refurbishment project. The unveiling included a new 50-yard turf field, new bleachers and updated signage.

“Cedars-Sinai is excited to collaborate with the Rams to support year-round programming at the Boys & Girls Club of Metro Los Angeles to further enrich health education and empower families and youth to put their health and wellbeing first,” said Cindy Chavira, executive director of Women and Children’s Services at Cedars-Sinai Guerin Children’s.

The new field will serve as a site for the newly established and no-cost Los Angeles Rams Flag Football League that will kick off at the end of the month. In partnership with the Boys & Girls Clubs of America, the league will serve more than 300 youth (ages 5-14) from eight Boys & Girls Clubs throughout Southern California.

Following the ribbon cutting, the Rams hosted a free football clinic for more than 100 local youth served by Challengers Clubhouse. Rams mascot, Rampage, and Rams Cheerleaders were on hand to cheer them on.

The Challengers Clubhouse serves over 150 children a day and is the only track and field facility in the community and the home field for local football games, track and field meets, summer camps and sports clinics.

“We are grateful to Andrew Whitworth for supporting our South LA youth and to the Rams, Cedars-Sinai and Bridgestone for their commitment to furthering BGCMLA’s mission to create safe spaces for our youth to learn, grow and play,” said Patrick Mahoney, CEO of Boys & Girls Clubs of Metro Los Angeles.