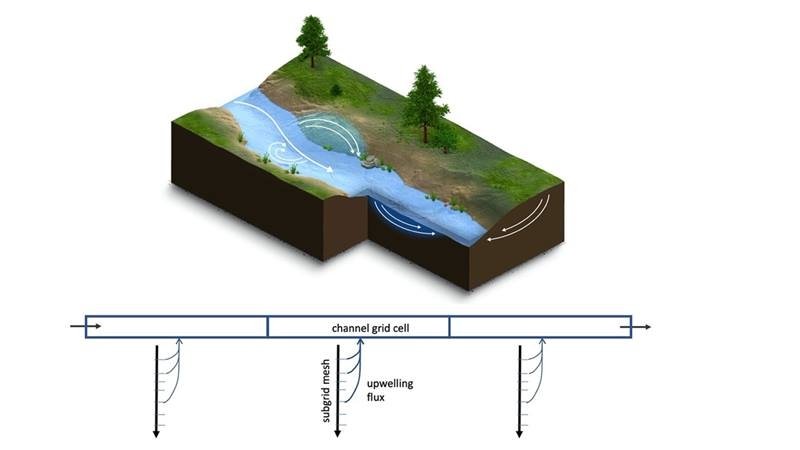 Schematic showing the exchange of water between a stream and surrounding groundwater in a stream corridor and how a recently developed river-corridor model represents that exchange.
Image courtesy of Oak Ridge National Laboratory.

In many streams and rivers, water moves between the open channel and the adjacent groundwater. This exchange enables biological and chemical reactions in the sediments near the streams. These reactions remove or transform carbon, contaminants, and nutrients. Researchers developed a new modeling strategy to represent these effects in watershed-scale models. The new model is equivalent to existing models when there are no reactions. However, unlike those existing models, it also accommodates biological, geological, and chemical reactions. In contrast to alternative representations based on diffusion, the new model can represent the development of sharp gradients in oxygen concentrations in sediments near the river.

Current computer models for how carbon, nutrients, and contaminants move and transform in river corridors do not adequately simulate biological, geological, and chemical (biogeochemical) processes. This is because the models do not fully capture scientists’ current and emerging understanding of the water properties and the biogeochemical factors involved. The underlying problem is a mismatch in how these models address the spatial scale of those processes versus the scale of the systems that they affect. A new model for river-groundwater exchanges can represent those processes at the scale at which they are typically studied. At the same time, the model works well at the scale of watersheds that link rivers and streams. This establishes a framework for a new generation of models that capture the biogeochemistry of river networks.

The transportation in rivers and streams of solutes—artificial materials such as pollutants and natural materials such as dissolved nutrients and gases—occurs primarily in flowing stream channels. However, biogeochemical transformations of carbon, nutrients, and contaminants often occur in highly localized metabolically active regions in the hyporheic zone, which is the region of saturated sediments adjacent to the stream channel. Representing stream hyporheic-zone processes is a central challenge in extending stream network flow models to include biogeochemistry. Multiscale models representing hyporheic-zone processes in subgrid models coupled to stream flow models provide an alternative to explicit three-dimensional representations, which are not feasible at watershed scales.

Researchers from Oak Ridge National Laboratory (ORNL) created a new multiscale representation of stream hyporheic processes that associates a one-dimensional subgrid model for transport and reactions with each channel grid cell in a stream network flow model. Each subgrid model represents a collection of streamlines that are diverted into the biogeochemically active hyporheic zone before returning to the flowing channel. The subgrid model is written in travel-time form, with hyporheic age serving as the independent spatial variable. In contrast to previous travel-time representations, the new model accommodates multiple mobile or immobile chemical species and general nonlinear biogeochemical reactions. Unlike alternative formulations based on multirate diffusion, the new multiscale model can represent biogeochemically important gradients in redox conditions.

This work is funded by the DOE Office of Science, Environmental System Science program of the Office of Biological and Environmental Research and is a product of the Interoperable Design of Extreme-scale Application Software (IDEAS)-Watershed project and the Critical Interfaces Science Focus Area at ORNL.