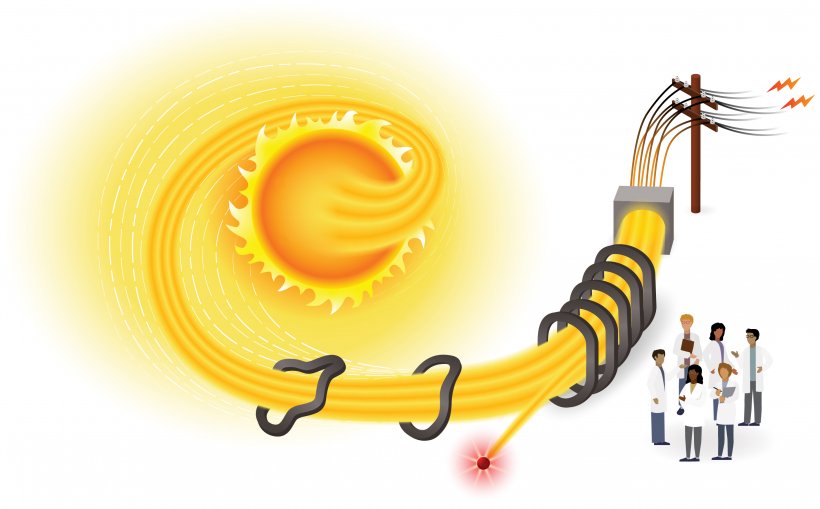 Envisioning the Future of Fusion Energy and Plasma Research

Plasma is the amazing fourth state of matter. While not as well-known as solids, liquids, or gases, plasma is far more common in our universe. It is a gas made up of atoms that have had electrons stripped off. It makes up the insides of stars, causes the Northern Lights, and powers the solar winds that bounce off the Earth’s magnetic field. It’s also fundamental to harnessing nuclear fusion reactions to produce energy. Research funded by the Department of Energy Office of Science has made tremendous strides in understanding plasma and fusion. A new report  from the Fusion Energy Sciences Advisory Committee (FESAC) lays out the path forward for fusion technology and plasma research.

DOE has already supported huge advances in fusion energy science. Scientists can now use research facilities to produce and measure fusion-grade plasmas heated to more than 100 million degrees. They can also simulate these processes with supercomputers to better understand how plasma functions. These accomplishments have prepared the U.S. fusion research community for the next step: studying “self-heated” or burning plasmas. The U.S. is a strong supporter of the multi-national ITER experiment being built in France, which will be the first facility to reach this goal.

Research supported by DOE has also established the fundamental knowledge needed to manipulate plasma for commercial applications. That information, along with assistance from DOE national laboratory researchers, enabled the semiconductor industry to use plasma to strip off or add atoms to their devices. Those new methods of manufacturing led to many of the electronic devices we use every day, including smartphones. Other major accomplishments include discovering warm, dense plasma and making extreme states of matter.

Building on these accomplishments, the Powering the Future: Fusion and Plasmas report is the result of the first strategic planning process for the fusion energy and plasma research community as a whole. Over 15 months, hundreds of researchers came together to provide input to the documents that fed into this report. The report lays out a new major goal – to build an economically-viable pilot fusion power plant by the 2040s. Reaching this goal will require advances in both fundamental plasma science and fusion technologies.

For fusion, FESAC notes that research needs to broaden its focus beyond the core of the plasma that powers fusion reactors to all of fusion nuclear science and technology. While existing research already studies the materials and technology needed for a fusion power plant, the report emphasizes the need to invest more in this area. In particular, researchers need to develop materials that can withstand the extreme conditions inside fusion reactors. In addition, they have to develop tools to limit the events that damage these materials as well as understand how those materials change when they’re exposed to high temperatures and extreme radiation. The research community also needs to develop technologies to make fusion fuel and harness plasma to produce electricity. The report recommends that the community should simultaneously develop technical designs for a fusion pilot plant.

For plasma science and technology, the report describes three major areas of research. Understanding astrophysical and high energy density laboratory plasmas would provide insight into our universe’s most mysterious processes. Discovering new states of matter would expand our knowledge of the building blocks of physics. Finding new ways to use plasma could lead to improvements in technology, including new microelectronics, biotechnologies, water purification systems, and medical treatments.

Fulfilling these needs will require substantial investments. The report provides alternate scenarios for what can be accomplished given potential future budget environments. Specifically, it recommends funding research facilities that are currently being built, as well as several new ones. These facilities include tools to study reactor materials and produce fuel.

Strengthening and building new partnerships will help researchers effectively use these facilities. The report recommends collaborating even more with other parts of the Department of Energy, other federal agencies, and private companies. It says that the U.S. should strengthen public-private partnerships to accelerate our domestic industry and maintain our leadership. With the ITER facility scheduled to begin operations in five years, it also recommends creating a multi-institutional research team in the U.S. focused on ITER. In addition, improving diversity, equity, and inclusion in the research community would make it so all scientists are welcomed, supported, and able to do their best work. Those improvements would help create the workforce that can carry out the long-range plan.

Powering the Future: Fusion and Plasmas lays out a bold vision for fusion and plasma research that the entire scientific community can support. The Office of Science is proud to have initiated and supported this plan for the future of the field.

The Office of Science is the single largest supporter of basic research in the physical sciences in the United States and is working to address some of the most pressing challenges of our time. For more information please visit https://www.energy.gov/science