Oxygen Formation in the Light of Gamma Beams 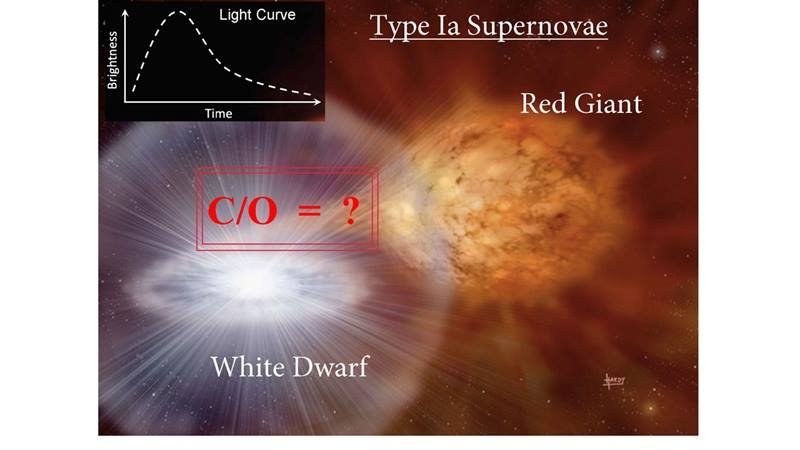 Type Ia supernova emits as much light as an entire galaxy, resulting from an unknown carbon to oxygen ratio. A newly developed method promises to measure this ratio.
Figure courtesy of Robin Smith, Nature Portfolio Astronomy Community, published open access under a CC BY license.

Nuclear fusion reactions make stars shine. These fusion reactions consume carbon-12 to produce oxygen-16. The ratio of carbon-12 to oxygen-16 points to the evolution of stars. For example, it determines whether Type II supernovae become black holes or neutron stars. Unfortunately, physicists have not been able to measure this ratio with precision using existing experimental methods. U.S. and British nuclear physicists have now developed a new method to measure the fusion reaction of carbon-12 with an alpha-particle to form oxygen-16. By shining gamma beams on an oxygen-16 target and capturing images of the outgoing alpha plus carbon-12 reaction products, the researchers measured a time-reversed scenario of the reaction (12C + α → + 16O + ϒ). The use of an optical readout time projection chamber (O-TPC) detector allows a complete view of the interaction.

By demonstrating the validity of this new method, this research gives impetus to continue measurements of the carbon to oxygen ratio to lower reaction energies. In a stellar environment, the (12C + α → + 16O + ϒ) fusion reaction occurs at a much lower energy than what was measured in this experiment. Oxygen formation is a high priority for nuclear astrophysics. The method will provide high-quality data that researchers expect will give a new perspective on this central research problem.

The carbon/oxygen ratio at the end of helium burning in a star is a central parameter of stellar evolution and it determines the light curve of a Type Ia supernova. The carbon/oxygen ratio is directly related to the rate of the (12C + α → + 16O + ϒ) fusion reaction in stars. Determining this fusion rate has been the goal of nuclear astrophysics for many years.

In the newly developed method, scientists shine gamma-ray beams, such as from the High Intensity Gamma-Ray Source facility at the Triangle Universities Nuclear Laboratory, onto an O-TPC detector. The O-TPC detector operates with carbon dioxide gas, and that gas is also the target material. The use of the O-TPC detector leads to measurements with very low background levels. Continuing measurements at lower energies promises to allow precise measurement of the rate of this key fusion reaction.

This material is based on work supported by the Department of Energy Office of Science, Office of Nuclear Physics.