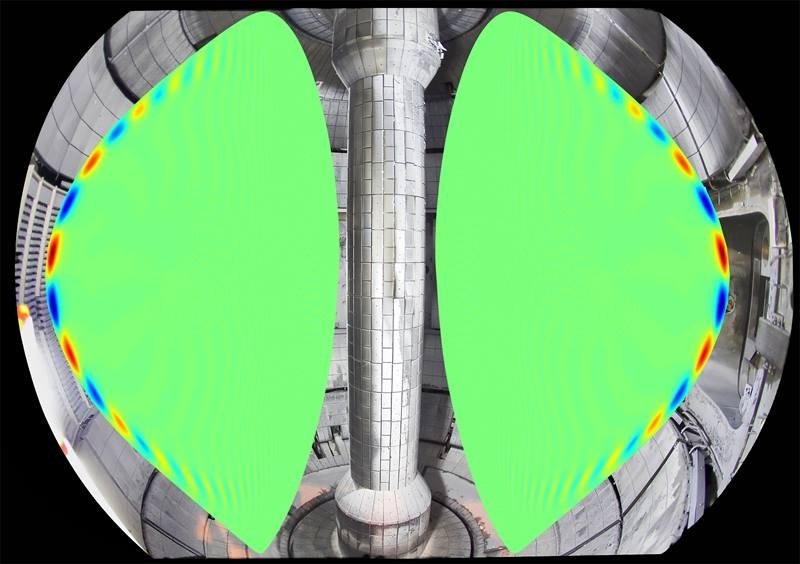 The structure of a plasma instability as calculated using a numerical simulation, shown inside a photo of the National Spherical Torus Experiment. This plasma instability is associated with explosive energy bursts that can damage the reactor vessel.
Image courtesy of Andreas Kleiner and the Department of Energy Office of Science

To achieve nuclear fusion, the ionized gas (plasma) in magnetic confinement devices known as tokamaks must be heated to temperatures hotter than the core of the sun. During high performance operation, the pressure and temperature of the plasma rise sharply in a narrow layer close to the plasma edge. This often causes frequent explosive bursts of heat and particles towards the surrounding vessel. If not controlled or mitigated, these bursts—called edge localized modes (ELMs)—can seriously damage the vessel wall in reactor-scale machines.

Researchers need to understand when and why ELMs occur to avoid damage to reactors. This is a crucial step in developing economical fusion power plants. Previously, researchers did not understand why they often observe ELMs in the National Spherical Torus Experiment (NSTX) compact fusion reactor. This observation is contrary to the predictions of models that generally work well on other facilities. By performing simulations with more realistic plasma dynamics, scientists have now discovered that the previously neglected internal resistance of the plasma can cause additional instabilities that drive explosive energy bursts in NSTX. Now that they understand this effect, fusion energy scientists can predict damaging explosive energy bursts. This will help them develop strategies to mitigate and control ELMs in spherical tokamaks such as NSTX. These tokamaks are promising candidates for future compact fusion power plants.

The plasma instabilities that are associated with explosive energy bursts (ELMs) are driven by the strong pressure gradient close to the plasma edge and associated self-induced electrical currents. Existing models treat the plasma as a perfect conductor. When applied to experiments in NSTX, a Department of Energy (DOE) Office of Science user facility at Princeton Plasma Physics Laboratory (PPPL), these calculations show that plasmas exhibiting ELMs appear far from the stability limit and thus should be free of energy bursts. To understand this discrepancy between experimental observations and model predictions, researchers added other physics effects, such as finite plasma resistivity, to the model. Solving the resulting model equations requires more computational resources compared with the ideal-magnetohydrodynamics model, in which the plasma is treated like an ideal conductor. The stability thresholds are calculated using the M3D-C1 code, which was interfaced with further numerical tools. Simulations were carried out at the National Energy Research Scientific Computing Center (NERSC) supercomputing facility, a Department of Energy (DOE) Office of Science user facility, and on PPPL clusters using a total of 1.4 million CPU hours.

Scientists discovered that plasma resistivity affects current-driven plasma instabilities associated with ELM onset, lowering the stability threshold. Investigation in ELM-free NSTX discharges show that their operating point is often limited by an ideal pressure-driven stability boundary, where resistivity is not destabilizing. This discovery will enable scientists to better stabilize the plasma in future devices to avoid damage caused by these energy bursts.