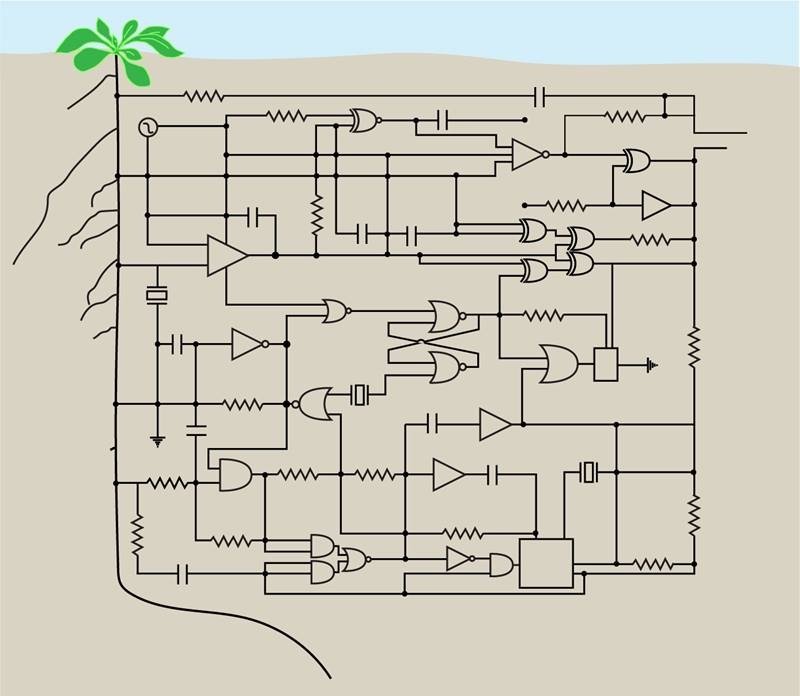 Controlling the activity of genes is an important step in engineering plants for improved bioenergy crops. This research developed synthetic genes that can be combined to achieve specific patterns of gene expression within the plant. The expression of the synthetic genes is programmed in the form of Boolean (“AND,” “OR,” and “NOT”) logic gates that work in a similar way to computer circuit boards. Using the synthetic gene circuits, the researchers successfully created predictable, novel expression patterns of fluorescent proteins. Finally, they used similar gene circuits to redesign root architecture by tuning the number of root branches.

To understand biological functions and design new biotechnology applications, scientists need to precisely manipulate gene expression. This is the process that converts instructions in DNA into proteins and other products that allow cells to do their jobs in an organism. Controlling specific patterns of gene expression in plants is challenging. One potential solution is synthetic genetic circuits. However, tuning circuit activity across different plant cell types has proven difficult. This research developed new genetic circuits that allow precise control of the root architecture. As roots are important for the uptake of water and nutrients, this approach will allow the design of tailored root architectures. This will in turn help researchers to engineer bioenergy crops with improved characteristics for growth in marginal lands.

To implement synthetic gene circuits in a multicellular context, the researchers used Arabidopsis roots as a model system where endogenous promoters drove tissue-specific expression of the synthetic transcription factors. The gene circuits generated novel expression patterns that were the result of successfully performing logical operations. The researchers further used one of the logic gates to quantitatively control the expression of a hormone signaling regulator to tune the amount of root branching in the root system of Arabidopsis. These results demonstrate that it is now possible to program gene expression across plant cell types using genetic circuits, providing a roadmap to engineer more resilient bioenergy crops.

Funding was provided by the Department of Energy Office of Science, Biological and Environmental Research program; the Burroughs Wellcome Fund Career Awards at the Scientific Interface; the Chan Zuckerberg Biohub; the Howard Hughes Medical Institute; and the Simons Foundation.

An On-Off Gene Switch May Protect Plants From Climate Change, The Daily Beast