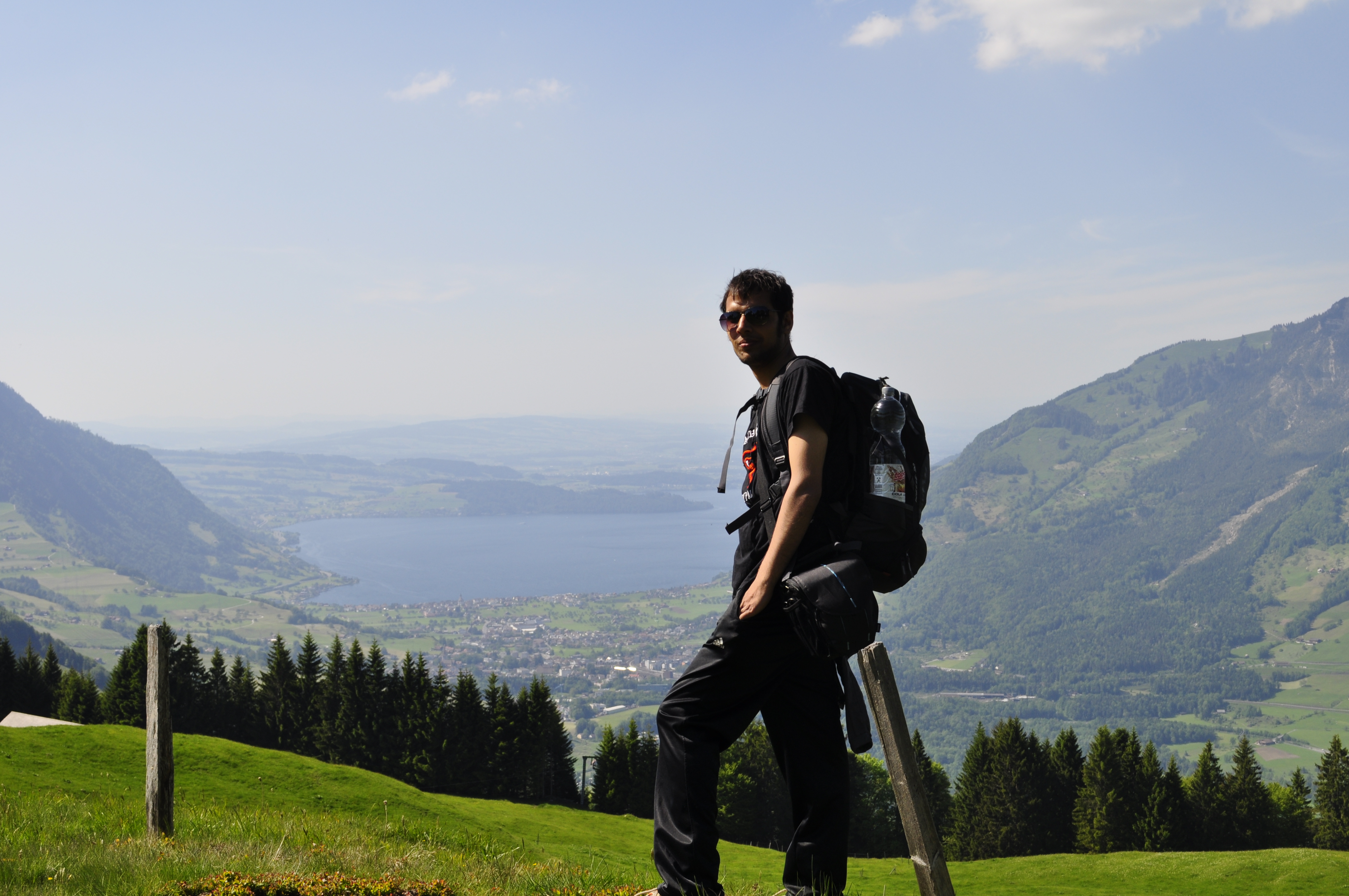 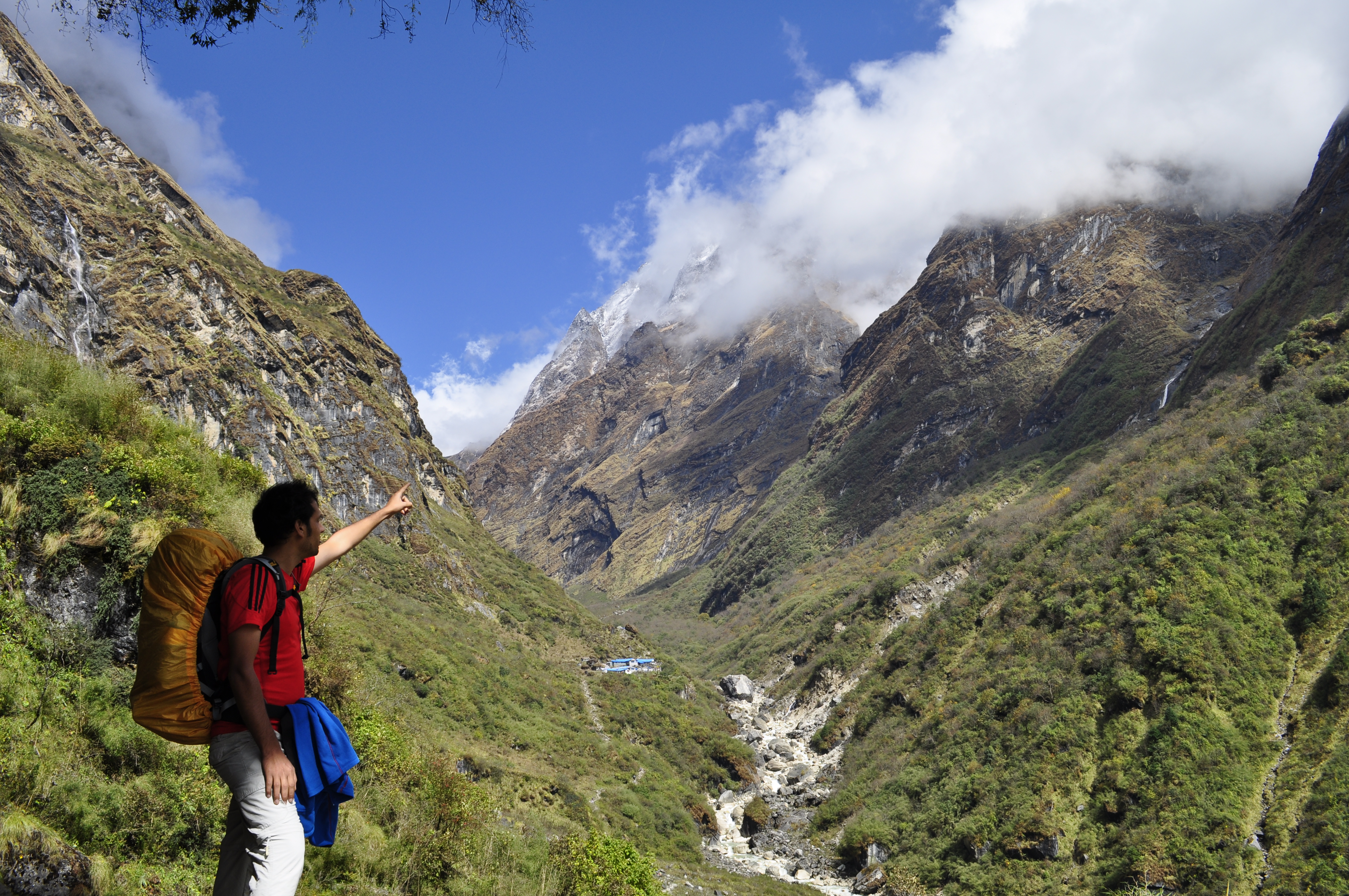 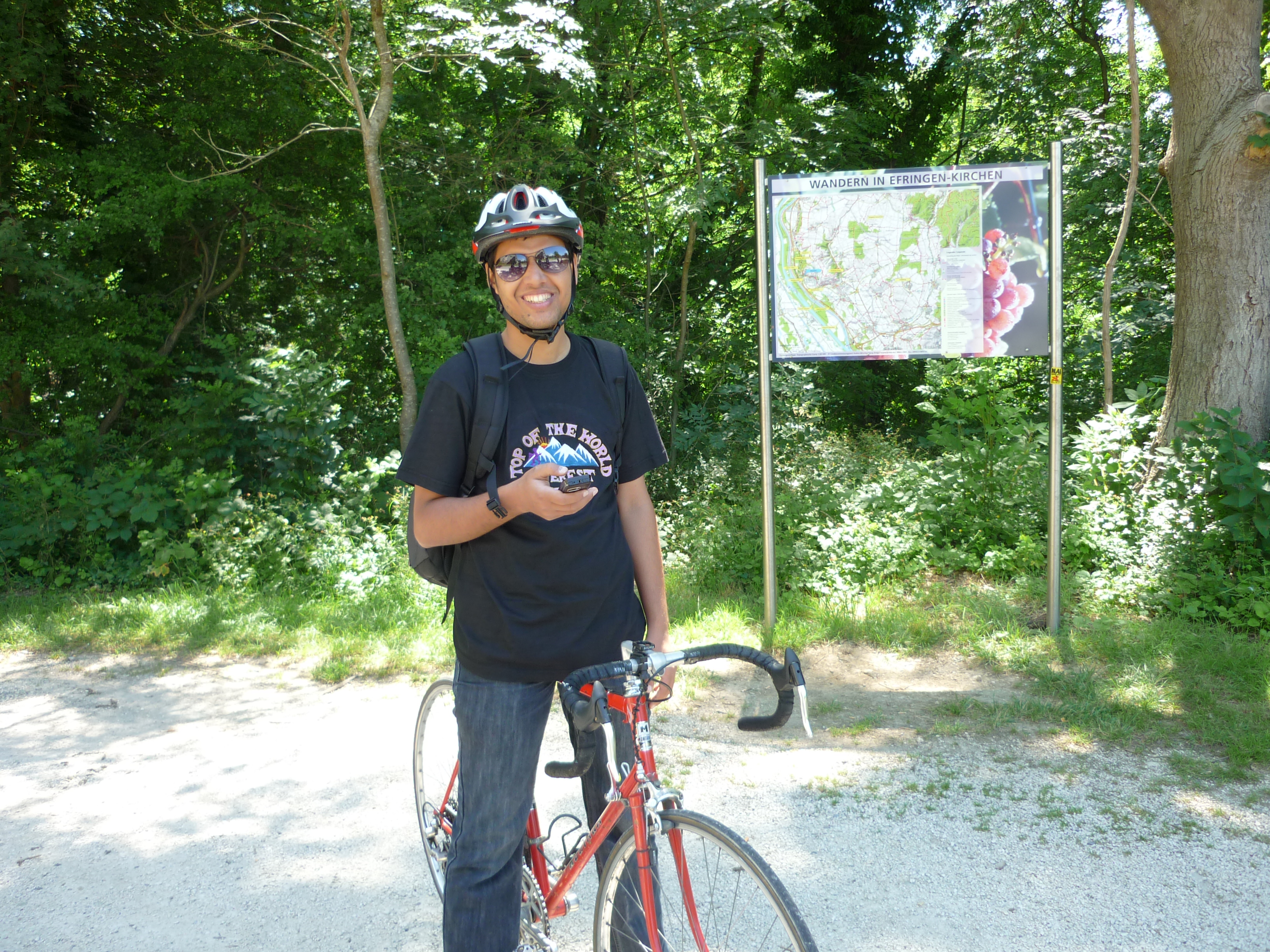 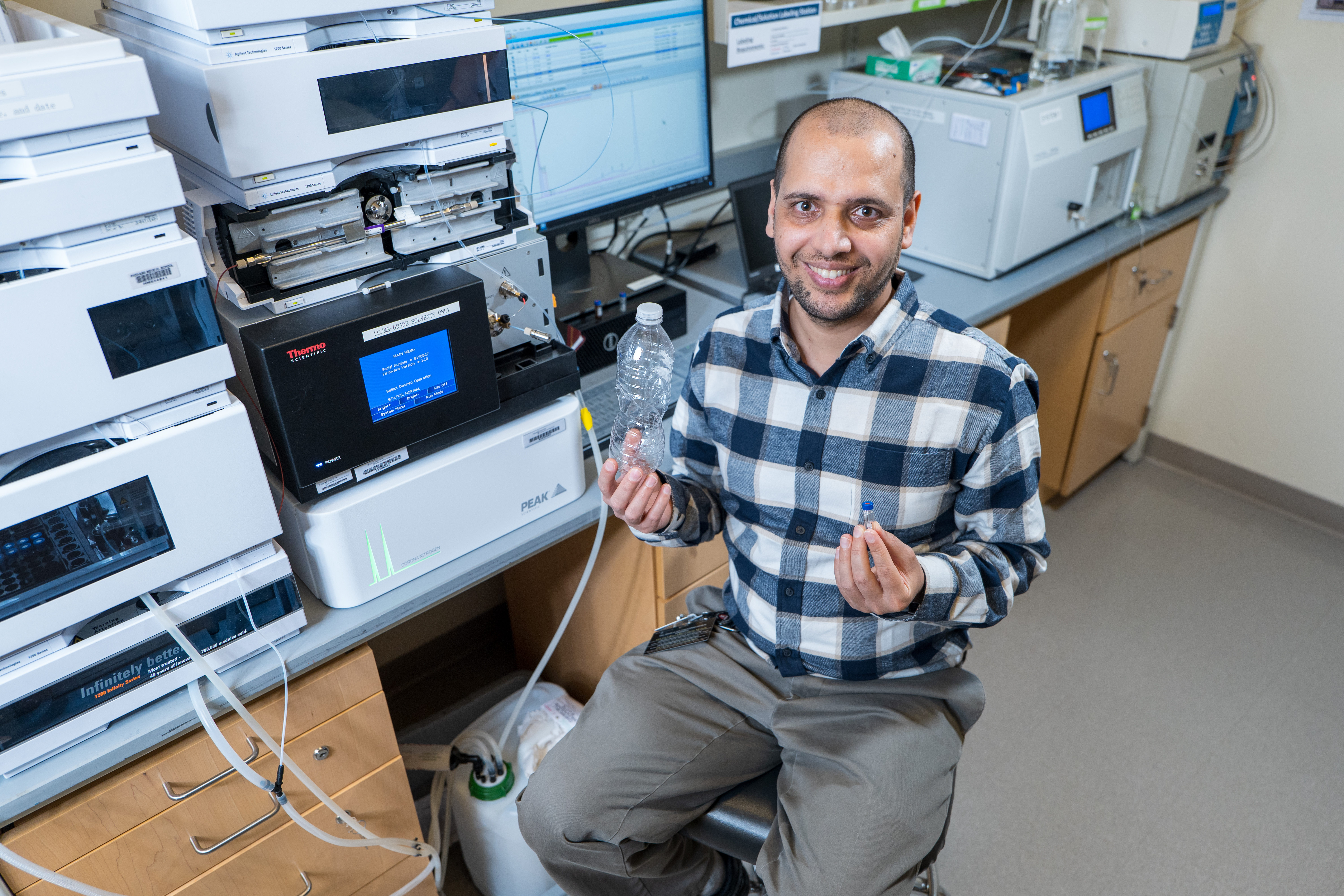 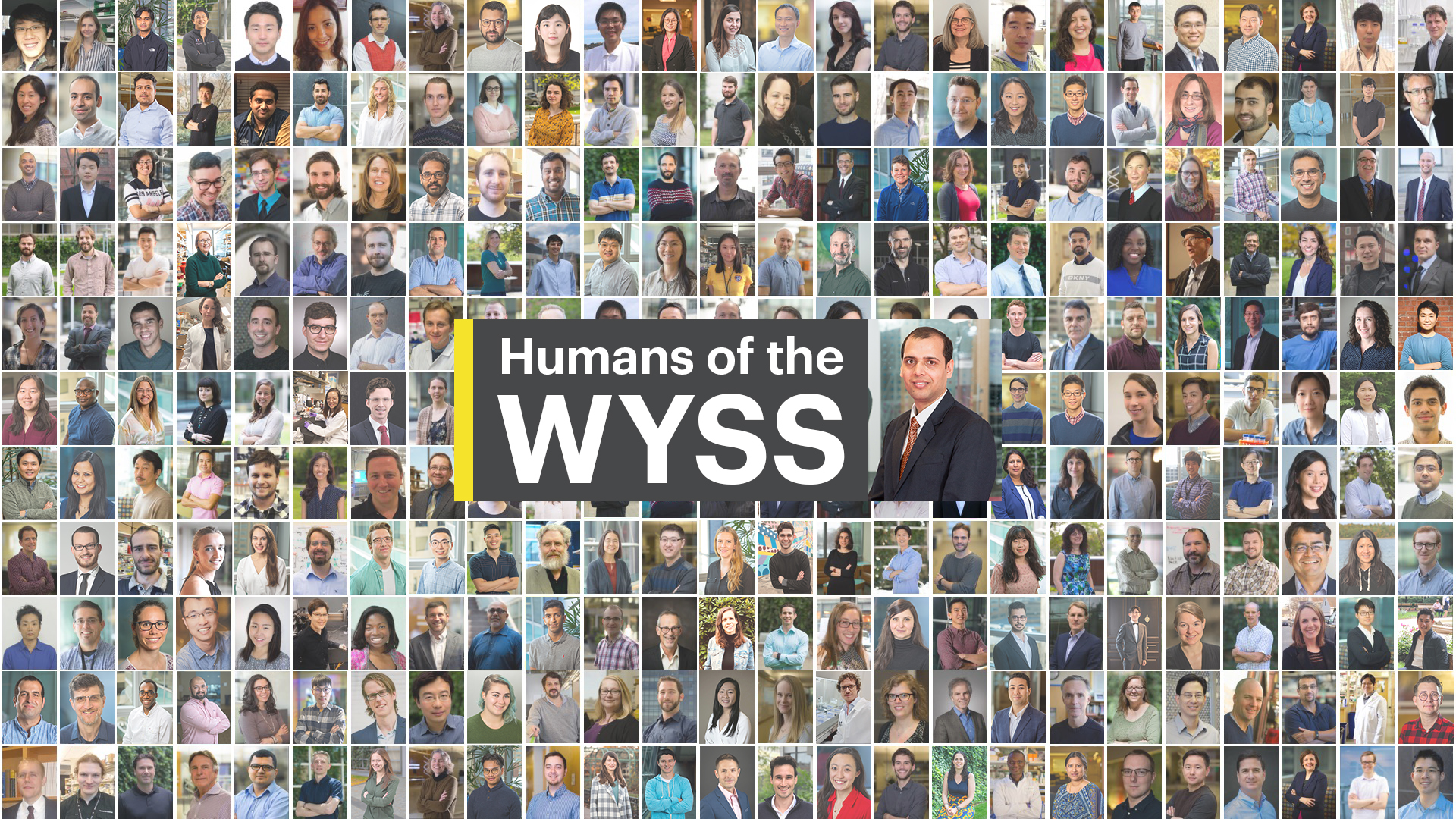 The Humans of the Wyss (HOW) series features members of the Wyss community discussing their work, the influences that shape them as scientists, and their collaborations at the Wyss Institute and beyond.

Early in his professional life, Vaskar Gnyawali realized he wasn’t content sitting in front of a computer screen all day, so he shifted from software engineering to microsystems engineering. Now, he develops technologies that can be used by people in need, whether they’re suffering from disease or living in an under-resourced country like Nepal where he grew up. Learn more about Vaskar and his work in this month’s Humans of the Wyss.

What are you working on?

The main project that I’ve been working on for more than two years is making smart, functional ingredients to improve the health profile of food by converting its sugar content, glucose and fructose, into dietary fiber after consumption. Since our product is not a sugar replacement, the food retains its sweetness, texture, and flavor profile. Currently we are focused on commercialization.

I consider the second project to be one of my babies – I was part of its inception. I was invited early on by former Advanced Technology Team member Richard Novak to work with him on a collaboration between the Wyss and artist Lynn Hershman to identify microbes that could degrade plastic. After a year of research, we were successful, and in conjunction with another Wyss technology, AquaPulse, we created an exhibit displayed at the New Museum in New York City.

Afterwards, we branched out as a Validation Project in 2021. Now, the project has five team members and we actively collaborate with the George Church’s lab. I’m proud that this project aligns with the Wyss’ vision of Biologically Inspired Engineering.

The third project, a Modular Scalable Droplet Maker (MSDM), is also one of my babies. When I started at the Wyss, I was working on a collaboration between Don’s lab and David Weitz’s lab. We were developing microparticles for drug delivery and food supplement. With the Weitz lab’s support, I was able to make and use the glass capillary device for double emulsions. As I kept working with it, I realized there was room for improvement in high-throughput production and industry scaling. That’s when MSDM started.

Now, I have a stackable modular and scalable droplet maker that is machine-made, industry adaptable, and reusable with a plug-and-play design. Currently, I am working on a high-throughput design with at least three parallel processing structures, which could be increased to at least ten or more structures. I am also working on swappable modules that can be used to produce other types of particles, such as gel or solid microparticles and nanoemulsions. I am excited about this device because it is a universal usage device that does not require microfluidic expertise. I believe this could be adopted by any biochemical lab or industry setting without extensive training.

What real-world problems do these projects solve?

The first project, with the smart ingredients will improve our food while helping mitigate diseases like diabetes and obesity, and conditions like fructose malabsorption, because they prevent glucose and fructose from being absorbed in the body. It also helps to improve the microbiome in our gut. This will have a large impact once we bring it to market.

The plastic-degrading bacteria addresses a huge problem: plastic pollution. All aquatic and land organisms, including humans, suffer immensely from this issue, and microplastics are seeping into our bodies, food, and air. Recent research even suggests microplastics have made their way into our bloodstream, which only escalates the need for a technology like ours.

As I mentioned, microfluidic droplets are widely used in biomedical, chemical, and pharmaceutical research. For example, a pharmaceutical company might want to encapsulate a therapeutic compound to protect it while it enters the body and travels to its target. If there was an easy-to-use, high-throughput tool for creating these droplets, it would make things more efficient for professionals in these industries.

What inspired you to get into this field? What continues to motivate you?

My original background was in computer engineering, and after graduating with my bachelor’s degree I worked at a software company for some time. The problem was that I didn’t get create anything physical since I was in front of the computer all day. I love working with physical things, so I realized I might need to move in a different direction.

I went to Germany for my master’s degree to study microsystems engineering, and got into microfluidics. My experience there inspired me to get into this field. For my thesis, I worked on an automated, handheld, and rapid sepsis detection device. Our goal was to make this technology accessible for all. In large, developed countries like Germany and the United States, there were sophisticated clinical labs to process diagnostics, but in developing countries, like in Nepal where I grew up, there were no centralized labs that were as functional. We wanted our technique to work in those settings.

Through that project, I realized that I liked the idea of bringing lab research to the hands of the people. If we do science and it doesn’t reach humans, it doesn’t feel as valuable. Engineers are made to bring science to life. I try to be a scientist as well as an engineer. The idea that projects I’m working on can directly affect people is what motivates me.

What excites you about your work?

The results! Also, the idea of bringing the work to people and helping them. I know that if we can accomplish our goals, we will be improving the lives of so many who are suffering from diseases, and that’s exciting.

What are some of the challenges that you face?

The challenges are the complexity of the science itself. We face them every day, but every day we try to address them. I don’t see any challenges as problems, I enjoy taking them on and solving them.

Why did you want to work at the Wyss?

I’d been interested in translational research for a while. When I was getting my Ph.D. in Toronto, Canada, Don presented at a conference there, and he showcased the Wyss Innovation Funnel.  He explained the process of bringing a science project to industry standards with the Wyss Institute’s resources and then spinning out to form a startup. It was very fascinating, and I thought I might want to work there. Furthermore, he said the Wyss has an average of one paper published in Science or Nature per month. I thought, “There is quality science and engineering and there is infrastructure for translation. Now that’s a place where I want to be!” Luckily, I’m here now.

What is unique about the Wyss?

It’s an ecosystem. It has all the diverse components you need for a complete project starting from scientists to business development to communications to everything in between. I think that’s the most unique thing that I’ve seen compared to any other similar institution. Having a different set of minds improves the project itself. For example, if we have a business development person who has knowledge of the market early in the project, we know the best route to take to bring our project into the hands of people.

The other unique thing is that we have access to all the tools and equipment we need – everything is within a few feet.

How has that impacted your work?

I’ve learned a lot. When I came to the Wyss, I thought that a project could only have one main goal at a time: scientific advancement or technology translation. Now, I am forced to think in more than one direction at once. Also, having PIs like Don and experts like members of the Advanced Technology Team available has been helpful. When I get blocked, instead of spending five days looking for a solution, I can find someone who could solve it in five minutes. This speeds up the process to make the project better and help me advance at a rapid pace.

How have your previous work and personal experiences shaped your approach to your work today?

My master’s degree was the baseline for my research. I liked how we worked there, and I still try to do similar things. When I moved to Canada to pursue my Ph.D., my PI’s used to say that I was a good engineer, but they were going to make me a scientist. Until then I never thought of a scientist as being different than an engineer. What they meant was that communication was another key lesson that you need to learn as a scientist, and as an engineer, I was missing that. This changed my way of thinking. Just hard work was no longer enough – I needed all the disciplines within the project to understand each other, communicate, and work together. I’ve tried to bring that with me to the Wyss.

The other thing I learned is collaboration. During my Ph.D., we moved from a smaller lab into a larger research building within a hospital. There, I was able to collaborate more with physicians to gain a greater understanding of the problems they were facing to solve them more effectively. Collaboration is a key to my work at the Wyss.

When not at the Wyss, and not social distancing, how do you like to spend your time?

I have two kids – a one-month-old and a two-and-a-half-year-old. They take up most of my time. Besides that, I like to travel, explore places, bike, and hike. I come from Nepal where we have many hills and I was born in a village where we had to cross four large hills to get to my uncle’s place, so hiking came naturally to me. I bike to work, but I also learned to bike recreationally while living in Germany. We used to take three to four-day-long bike trips.

I took some of my favorite trips hiking in Europe and America. I was often the one who organized hiking trips for our group of friends, even when the weather forecast looked bad, I’d think of it as an adventure.

What’s something unique/fun about you that someone wouldn’t know from your resume?

I like to collect coins and paper currencies. I don’t buy the collections, I exchange my currency with friends and colleagues.

If you had to choose an entirely different career path, what would it be?

I always liked pilots and their work. They can travel anywhere. I wanted to be a pilot, but I didn’t have any options for that back home. So, if I was going to try something that wasn’t in this field, that’s what it would be. I’d still want to try and get my license to fly a plane.

What does it feel like to be working on cutting-edge technology that has the potential to have a real and significant impact on people’s lives and society?

I feel very excited and grateful. I think I’m blessed to be working on these projects. This is where I get an opportunity to give back to society. I think it’s a one-of-a-kind thing. Whenever I see projects that I think could be beneficial for the village where I come from, they are the most interesting to me. I’m happy to be able to work with these techniques on these projects here at the Wyss and have the chance to make positive change for people, especially those living where I grew up.