It’s a 40-minute road trip from Ames to Zearing, with a few right-angle turns to the north and east.

This time of year, you’ll drive past fields that are black and damp, still stubbled with the remains of last year’s corn and soybean crops. You’ll also drive past rows of turbines spinning in the spring winds, harvesting a new cash crop.

Zearing, “A Great Town to Call Home,” is home to more than 500 residents who send their kids to the elementary school in town and cheer on the Colo-NESCO Royals. (NESCO? That’s Northeast Story County.) At the end of July, they celebrate their town during Zearing Days.

The city’s latest newsletter includes a reminder to keep your trash from blowing in the spring winds, an invitation to an American Legion fish and chicken dinner, thanks to the many sponsors of the Seventh Annual Dakins Lake Ice Fishing Derby and before-and-after pictures of a building renovation supported by a county façade grant.

For Rick Sanders, Zearing is Mid-Iowa’s classic rural community. As a Story County supervisor from 2010 to 2019, Sanders said his primary focus was economic and community development in the county’s smaller towns. And he thinks what’s good for Zearing would be good for most any rural Iowa town.

One of the rural development issues he regularly heard about was broadband connectivity, said Sanders, now the president of the Iowa State University Research Park.

Sanders remembers trying to check email on his smart phone during visits to Zearing. “You could make a call,” he said, “but you couldn’t get any email.”

That helped him realize, “We have to do a better job with connectivity.”

Enter Hongwei Zhang, a friendly, engaging Iowa State professor of electrical and computer engineering who can patiently explain the basics of “heterogenous high-throughput wireless platforms.” He was willing to tour Mid-Iowa a few years ago to ask city, school and county leaders to support a major rural broadband research project he hoped would win millions in grant support and lead to innovative wireless solutions.

With that $16 million grant now in hand, Zhang is doing all he can to help grow what he calls a “Broadband Prairie” for rural Iowa and beyond.

It’s not that rural Iowa is some kind of broadband desert. There are many good, reliable, gold-standard fiber optic connections across rural Iowa.

Dave Duncan, the CEO of the Iowa Communications Alliance based in West Des Moines, said the association represents 250 entities, including 120 locally based communications providers. The association calls itself “The voice for connectivity.” Its mission statement says, in part, “ICA firmly believes that broadband communications is the tool and industry capable of growing and transforming Iowa.”

These days, Duncan said the association’s members serve 714 Iowa communities and 562 of them have fiber-optic internet connections to homes and businesses in town. Among those, 328 communities have fiber connections that extend outside town, including down the lane to farms.

The alliance is making progress toward its goal of getting “every Iowan connected with robust, affordable and reliable broadband,” Duncan said.

So what’s the problem?

Well, there isn’t universal coverage from river to river. In Iowa, after all, people live on every square mile. And affordability can be an issue. Duncan said while rural providers can offer quick, responsive service, they don’t have the scale or density of customers to match some of the prices charged by the big, out-of-state providers in Iowa’s cities. 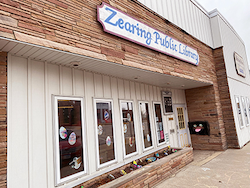 Zearing photo courtesy of the City of Zearing.

Those issues, for example, have Shay Spencer, the librarian at the Zearing Public Library, making sure the library’s Wi-Fi is always turned on. During a recent “Toddler Tuesday” at the library, she said it’s not unusual for residents to park on Main Street, right in front of the library, and connect to the internet. (Spencer says she’s grateful the library’s internet service is donated by the local provider, Minerva Valley Companies.)

Even though fiber optic connections are available from Minerva Valley, residents working from home tell him, “Speeds aren’t quick enough – it’s not like in Ames or other big towns.”

He said cell phone service was still a problem until a new tower was installed east of town last year.

Now, with the new tower, Reed said, “My phone is quicker than getting on a computer.”

When Zhang toured the area seeking project partners, he had no trouble getting local buy in. The list includes the City of Ames, the Meskwaki Nation, the Iowa Communications Alliance, Story County and the public-school districts of Ames, Gilbert, Boone, Marshalltown and Nevada.

“We are excited about the proposal’s focus on smart agriculture and the needs of a connected rural America, including many small communities and farmsteads in Story County,” Sanders wrote in the county’s December 2018 letter of support.

“Almost everyone I have spoken to appreciates the importance of rural broadband,” Zhang said. “They are all very generous in offering their support. I am also deeply grateful for their general support and love for ISU, too.”

In June 2021, the Platforms for Advanced Wireless Research (PAWR) program announced $16 million in support for ARA (which stands for Agriculture and Rural Communities and has a logo featuring the Ara constellation of stars). Over five years, the National Science Foundation is providing $7 million, the U.S. Department of Agriculture’s National Institute of Food and Agriculture is providing $1 million and PAWR industry partners are providing $8 million in cash and in-kind support.

In a paper describing the project, the researchers said their efforts are like the work that led to rural electrification in the 1930s:“Just as rural electrification has required rural-focused technology innovations (e.g., higher-voltage distribution networks) and community capacity building (e.g., through electric cooperatives), rural broadband requires rethinking wireless systems design to embrace the community, application, economic, and operational contexts of rural wireless systems, and it requires not only wireless innovation but also rural application innovation and community capacity building.”

The project will deploy wireless infrastructure on rooftops, cell phone towers and water towers at 12 fixed locations in, east to west, State Center, McCallsburg, Nevada, Ames, Gilbert and Boone. There will also be one portable site. Each of the 13 sites is expected to offer advanced wireless coverage to anybody up to six miles away.

That could include farmers monitoring soil or plant sensors, researchers using robots in fields, students working in classrooms, school districts tracking buses and families at their farms or acreages streaming a video.

Zhang said he considers ARA one of the first projects of Iowa State’s new Center for Wireless, Communities and Innovation, which was just approved in February by the state Board of Regents.

The center is all about meeting the needs of the 39% of rural Americans who don’t have access to rural broadband services, according to the proposal submitted to the regents.

These days, the proposal says, “Broadband has become an essential utility for rural communities and industries … It is now time to chart a future when advanced wireless becomes a key enabler for affordable, universal rural broadband.”

A fact sheet from Iowa State’s Office of the Vice President for Research makes the university’s ambitions clear: “How Iowa Can Lead the Nation in Bridging the Broadband Divide.”

The sheet describes the ARA project. It mentions the federal infrastructure bill passed in November 2021 includes $65 billion for broadband expansion and access. It includes a section on the “Iowa Leadership Strategy.” 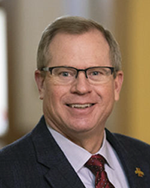 “Access to high-speed broadband is essential for helping the rural areas of our state and nation truly flourish,” said Peter Dorhout, Iowa State’s vice president for research. “It bridges the divide in rural and urban education systems; it supports critical community services like telehealth that enhance the livability of rural locations; and it stokes economic growth by supporting workforce development, advanced manufacturing and a precision-driven agricultural industry that is becoming more data-intensive with each passing year.”

Make all that possible and you’ve grown what Zhang likes to call a “Broadband Prairie” that makes connections where there are none and fills in the gaps around towns such as Zearing.

Zhang likes the term and its play on Silicon Valley and Midwestern efforts to build a corresponding Silicon Prairie. Zhang said he started using the term when ARA was announced last summer.

He particularly likes the intentionality behind the term. Silicon Valley didn’t just happen, he said. It grew from decades of dedicated research, innovation and entrepreneurship.

“It’s good for Iowa State to think about how we can do the same,” he said. “We need to be strategic, so we don’t let this opportunity slip away. How can we make sure we can contribute in the best way possible?”