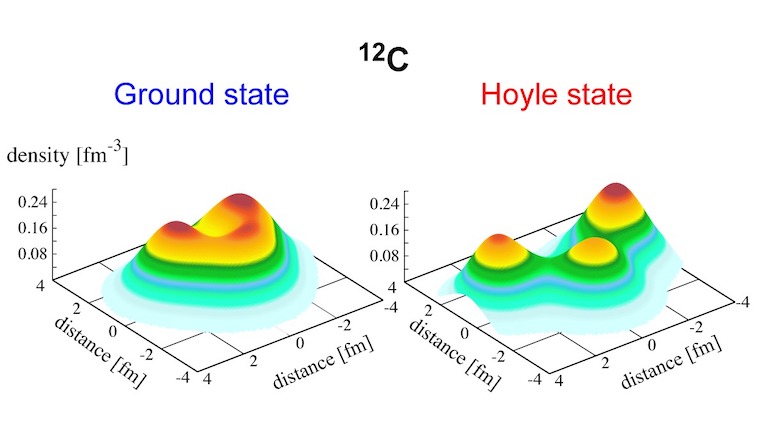 With the help of the world’s most powerful supercomputer and new artificial intelligence techniques, an international team of researchers has theorized how the extreme conditions in stars produce carbon-12, which they describe as “a critical gateway to the birth of life.”

The researchers’ fundamental question: “How does the cosmos produce carbon-12?” said James Vary, a professor of physics and astronomy at Iowa State University and a longtime member of the research collaboration.

“It turns out it’s not easy to produce carbon-12,” Vary said.

It takes the extreme heat and pressures inside stars or in stellar collisions and explosions to create emergent, unstable, excited-state carbon nuclei with three loosely linked clumps, each with two protons and two neutrons. A fraction of those unstable carbon nuclei can shoot off a little extra energy in the form of gamma rays and become stable carbon-12, the stuff of life.

A paper recently published by the online journal Nature Communications describes the researchers’ supercomputer simulations and resulting theory for the nuclear structure of carbon that favors its formation in the cosmos. The corresponding author is Takaharu Otsuka of the University of Tokyo, the RIKEN Nishina Center for Accelerator-Based Science and the Advanced Science Research Center of the Japan Atomic Energy Agency.

The paper describes how alpha particles – helium-4 atoms, with two protons and two neutrons – can cluster to form much heavier atoms, including an unstable, excited carbon-12 state known as the Hoyle state (predicted by theoretical astrophysicist Fred Hoyle in 1953 as a precursor to life as we know it).

The researchers write that this alpha-particle clustering “is a very beautiful and fascinating idea and is indeed plausible because the (alpha) particle is particularly stable with a large binding energy.”

To test the theory, the researchers ran supercomputer simulations, including calculations on the Fugaku supercomputer at the RIKEN Center for Computational Science in Kobe, Japan. Fugaku is listed as the most powerful supercomputer in the world and is three times more powerful than No. 2, according to the latest TOP500 supercomputer rankings.

Vary said the researchers also did their work ab initio, or from first principles, meaning their calculations were based on known science and didn’t include additional assumptions or parameters.

They also developed techniques in statistical learning, a branch of computational artificial intelligence, to reveal alpha clustering the Hoyle state and the eventual production of stable carbon-12.

Vary said the team has worked for more than a decade to develop its software, refine its supercomputer codes, run its calculations and work out smaller problems while building up to the current work.

“There’s a lot of subtlety – a lot of beautiful interactions going on in there,” Vary said.

All the calculations, physical quantities and theoretical subtlety match what experimental data there is in this corner of nuclear physics, the researchers wrote.

So they think they have some basic answers about the origins of carbon-12. Vary said that should lead to more studies looking for “fine-grain detail” about the process and how it works.

Was carbon production, for example, mostly the result of internal processes in stars? Vary asked. Or was it supernova star explosions? Or collisions of super-dense neutron stars?

One thing is now clear to the researchers: “This nucleosynthesis in extreme environments produces a lot of stuff,” Vary said, “including carbon.”

The post Iowa State Researchers reveal the origin story for carbon-12, a building block for life appeared first on www.research.iastate.edu.