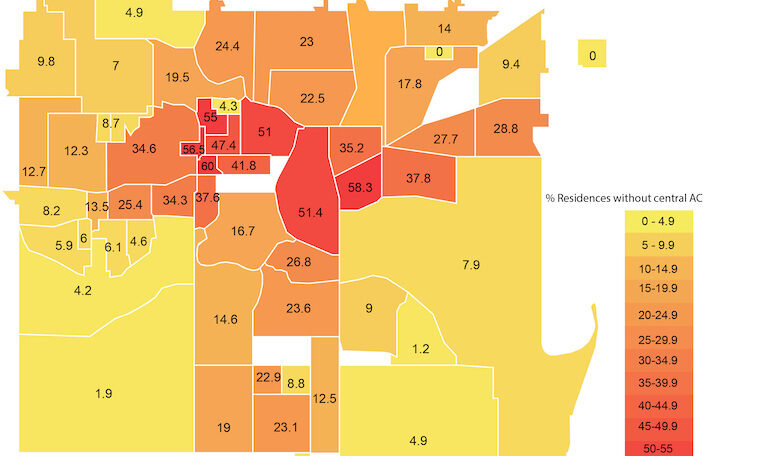 Elderly and low-income residents suffer disproportionately from extreme heat during the summer months, so researchers at Iowa State University are leading an effort to develop innovative tools to better predict when such emergencies might occur.

The research team recently received a three-year, $1.2 million grant from the National Science Foundation to gather data and develop sophisticated machine-learning tools capable of giving residents in higher-risk Des Moines neighborhoods more time to prepare for dangerous heat in their homes. The researchers are collaborating with officials from the city of Des Moines, Polk County, the University of Northern Iowa and the University of Texas at Arlington and plan to make their tools widely available after the conclusion of the grant.

Extra preparation time could help residents take precautions before a heat wave or make plans to stay elsewhere until the weather cools off, said Ulrike Passe, a professor of architecture at Iowa State University and principal investigator on the grant.

Excessive heat was the leading cause of weather fatalities in the United States in 2021, according to the National Weather Service. Extreme heat disproportionately affects the elderly and residents of low-income neighborhoods. Often, that’s due to older and energy-inefficient buildings that have outdated air conditioning units or no air conditioning at all. It can also be due to residents’ hesitance to turn on the air conditioning to save money, Passe said.

The National Weather Service issues heat warnings, but those notifications occur at a wide scale that often can’t account for the specific factors at play in neighborhoods or individual homes that make them susceptible to heat. So the research team envisions an automated heat alert system that notifies residents when their home might be at risk of getting dangerously hot. The tool would account for variables such as construction materials, vegetation and surface color of buildings, which all influence the way a structure heats up or stays cool when weather changes. The result would be a system that provides better lead time for residents with warnings tailored specifically to their living environment.

“With this system, we can get warnings to residents with specifics and precision about heat conditions,” Passe said. “We hope this data-driven approach will give folks more of an opportunity to go somewhere else during a heat wave or do something to their home that will allow them to be better prepared.”

The research team will start by collecting data from residents in six inner-city neighborhoods in Des Moines that are disproportionately susceptible to dangerous heat. The outreach efforts will involve focus groups with residents and community organizations, and some residents will be asked to install sensors in their homes to monitor temperatures.

The researchers will use machine learning to sift through the data compiled during the project and account for the physics of temperature differentials and airflow. They’ll then design an app that allows residents to input data specific to their living environment and then receive personalized warnings about the potential for dangerous heat.

The success of the effort will depend on the researchers gathering enough data from residents in the Des Moines neighborhoods selected for the project. The researchers will identify at least 20 residents in homes, apartments and other buildings to install a small sensor box in the warmest part of their building to monitor temperature and airflow during the hottest months of 2023 and 2024. All data recorded for the project will be kept anonymous, and the selected residents will be compensated for their participation.

Any resident interested in participating can contact the research team by sending an email to [email protected] to request more information.

Passe said the machine-learning methods used to build the alert system could be used in other locations around the world. And the benefits could reach beyond low-income neighborhoods as climate change continues to intensify the heat-island effect in a greater variety of urban areas.

Passe said the system also could prove useful following extreme weather events that leave entire regions without electricity for extended periods, such as hurricanes or Iowa’s 2020 derecho. When numerous homes are left without air conditioning, the automated heat emergency warning system could help residents better anticipate the threat of extreme heat, she said.