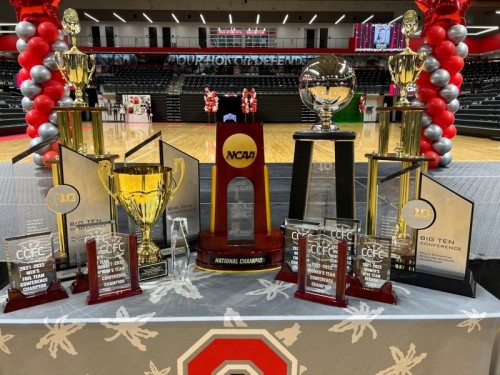 Buckeyes celebrate a season of championships

With fireworks, photos and food, Buckeye trophy winners gathered this week to celebrate the conclusion of a remarkable year.

The Ohio State University Department of Athletics hosted a celebration to honor players and coaches from 10 programs who won either conference or national championships so far this year. Senior Vice President and Wolfe Foundation Endowed Athletic Director Gene Smith presided over the ceremony at the Covelli Center Tuesday afternoon.

More than 30 athletes from nine sports were honored for individual national or Big Ten championship performances.

One theme that the student-athletes returned to when they spoke about their championship experience was the importance of a positive and winning culture. Katie Trace, a Big Ten champion in the 800 free relay, is part of a team that has won three consecutive Big Ten conference championships in women’s swimming and diving.

“It’s definitely the culture that we built on the team. I think that it’s a lot easier to win when you have fun doing it,” she said. “Everybody wants to be a Buckeye because we’re excellent at what we do.”

For Liz Schepers, it was faith in teammates and coaching that helped the women’s hockey team hold off Minnesota Duluth for a 3-2 victory in the Frozen Four national championship.

“Once we took the lead, the last couple of minutes, we knew exactly what we had to do to get the job done and seal the deal,” she said. “We have so much confidence in each other and trust in our game plan.”

Ohio State’s historic rivalry with the University of Michigan was never far from the minds of the athletes. Men’s gymnastics won the Big Ten regular season championship with a win over No. 4 Nebraska this year.

“Other than winning [the championship] on senior day, the thing that stood out to me the most was beating Michigan [during the regular season], and that’s the first time in the last five years,” said gymnast Dexter Roettker.

Ohio State is in third place in the Learfield Directors’ Cup. The cup recognizes excellence across athletics programs. Points are awarded based on each institution’s finish in NCAA Championships.