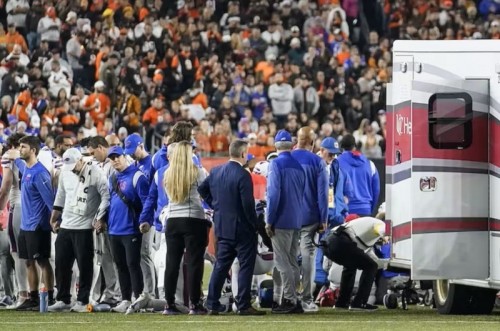 How sports broadcasters responded to the Damar Hamlin injury 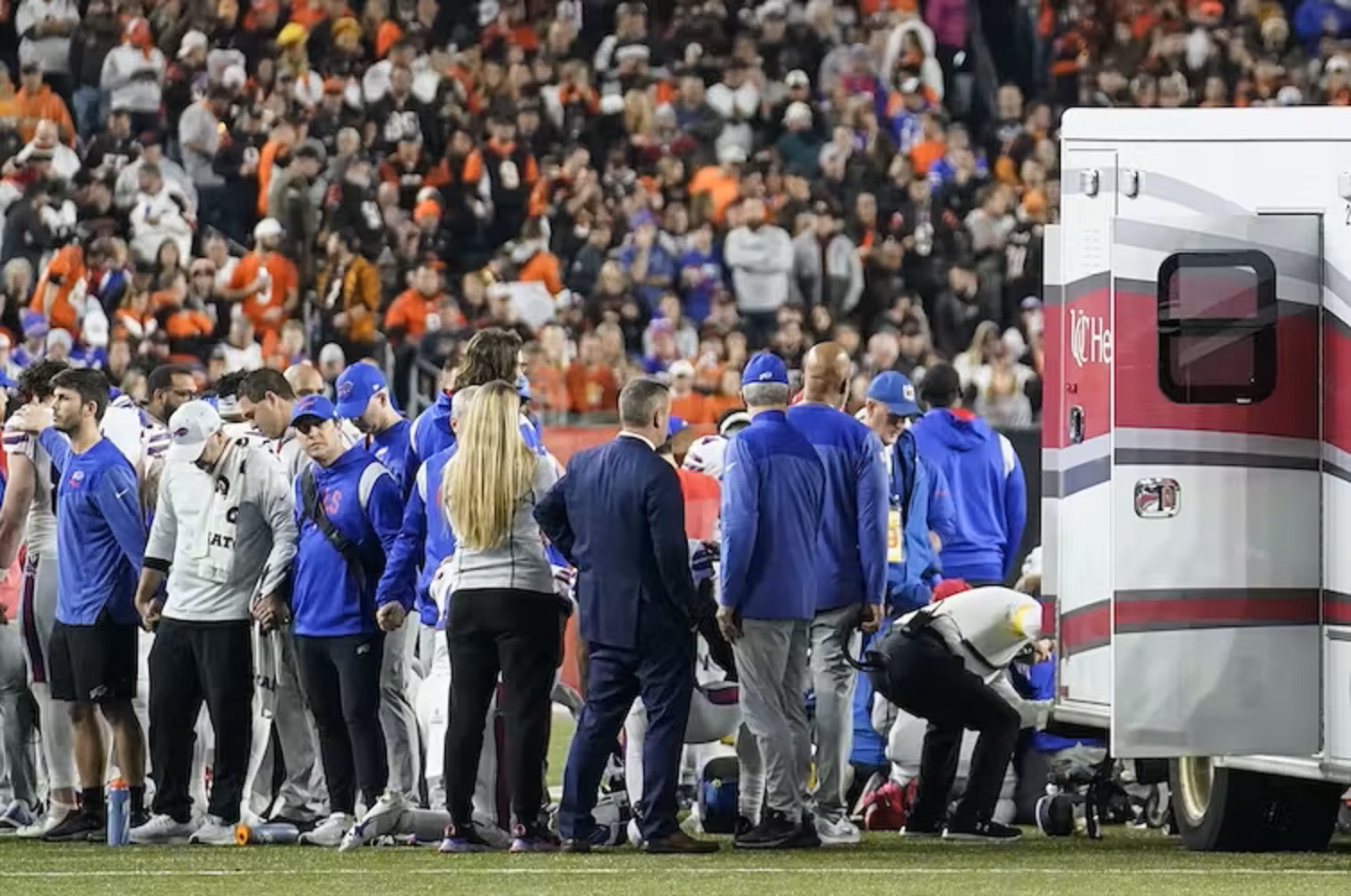 Medical personnel attend to Buffalo Bills safety Damar Hamlin after he collapsed on the field during an NFL game in Cincinnati on Jan. 2, 2023. AP Photo/Joshua A. Bickel

Injuries are an unfortunate part of any sport – none more so than in the NFL, where players can be felled in front of a TV audience in the tens of millions.

Typically, when a player suffers an injury, the media cuts to commercial and returns with replays of the injury – sometimes running it over and over, using every available camera angle, while analyzing what might have happened and the ramifications for the player and team.

But in the case of Buffalo Bills safety Damar Hamlin, who collapsed to the ground after a tackle during the “Monday Night Football” game between the Bills and the Cincinnati Bengals, it quickly became apparent that this was no broken arm or torn ACL. This was a matter of life and death. Paramedics worked to keep him alive on the field before he was transported to a hospital, where he remains in critical condition.

As the tragic scene played out, ESPN’s broadcasters and studio hosts were left to explain what was happening in real time, with virtually no information.

I am a professor of sports journalism and spend much of my time teaching students how to cover games. As a sportswriter, I have covered many contests as if they were battles, with the language of war interwoven with feats of extraordinary human accomplishment.

When crisis strikes sports, however, it is left to the media to report in, around, about and through the moment. Some do it well and some fail miserably.

In its coverage of Hamlin’s injury, ESPN was, I believe, a sound and responsible broadcaster during one of football’s darkest on-field moments.

ESPN’s broadcasting duo of Troy Aikman and Joe Buck, along with sideline reporter Lisa Salters, relayed the scene as it unfolded. But instead of filling the live airtime with rambling commentary and sensationalism, they responded with compassion and care. They avoided speculating about Hamlin’s condition and ultimately appealed to the NFL to suspend the game, with Aikman asking, “How do you, as a member of the Buffalo Bills or the Cincinnati Bengals, continue on to play football?”

As The Washington Post noted, “The broadcast was measured, informative and emotional.”

From the studio, former NFL players Booger McFarland and Ryan Clark offered their perspectives on what it might feel like to be a player on the field, in that moment – whether as a member of the Bills or the Bengals. They reminded the audience that players are first and foremost people. McFarland acknowledged the inherent violence of the game, adding, “I think we reached a point where nobody is concerned about football anymore tonight.”

Clark, who himself was hospitalized for a splenic infarction in 2007 shortly after playing a game for the Pittsburgh Steelers, acknowledged that part of living an NFL dream is “putting your life at risk.”

The gravity of the situation was reflected in ESPN curtailing all commercials for more than an hour to provide uninterrupted coverage. In doing so, the network stressed the importance of a player’s life over the game or profit motive.

When the media misfires

When disaster strikes on a live sports broadcast, it’s easy to say something wrong, especially in an age where words can be distributed widely, dissected and criticized on social media.

Just ask controversial ESPN commentator Skip Bayless, who wasn’t even on the air, but nonetheless went viral for all the wrong reasons after tweeting: “No doubt the NFL is considering postponing the rest of this game - but how? This late in the season, a game of this magnitude is crucial to the regular-season outcome … which suddenly seems so irrelevant.”

Bayless may have had a point – the NFL must now work out how to address the outcome of this game and the implications for the postseason – but his tone and timing led to much criticism.

Bayless is far from the only broadcaster to be accused of insensitively following the death or serious injury of sports stars.

The 2020 death of Kobe Bryant and his daughter Gianna was a model for what can go wrong, with TMZ breaking the news before their family was notified. ESPN relegated the news to ESPN2 so as not to interrupt Pro Bowl coverage. In their rush to break details from the story, some reporters trafficked in misinformation. ABC News ultimately suspended a reporter who said on air that all four of Bryant’s daughters were among the crash victims, while the BBC ran footage of LeBron James instead of Bryant.

Driver Kevin Ward, Jr. was killed during a 2014 sprint car race, but it was Tony Stewart, the man whose car struck him, who garnered most of the media coverage. The media was quick to lay the blame squarely on Stewart before an investigation absolved the driver and revealed Ward was under the influence of enough marijuana to impair him at the time of the crash.

Sports media was perhaps never more criticized for incident coverage than it was in 2020, when Danish soccer player Christian Eriksen suffered cardiac arrest on the field. BBC cameras showed not only medical professionals performing chest compressions as Eriksen struggled for life, but also his crying life partner and traumatized teammates. Cameras lingered for a full 15 minutes before cutting to the studio hosts. 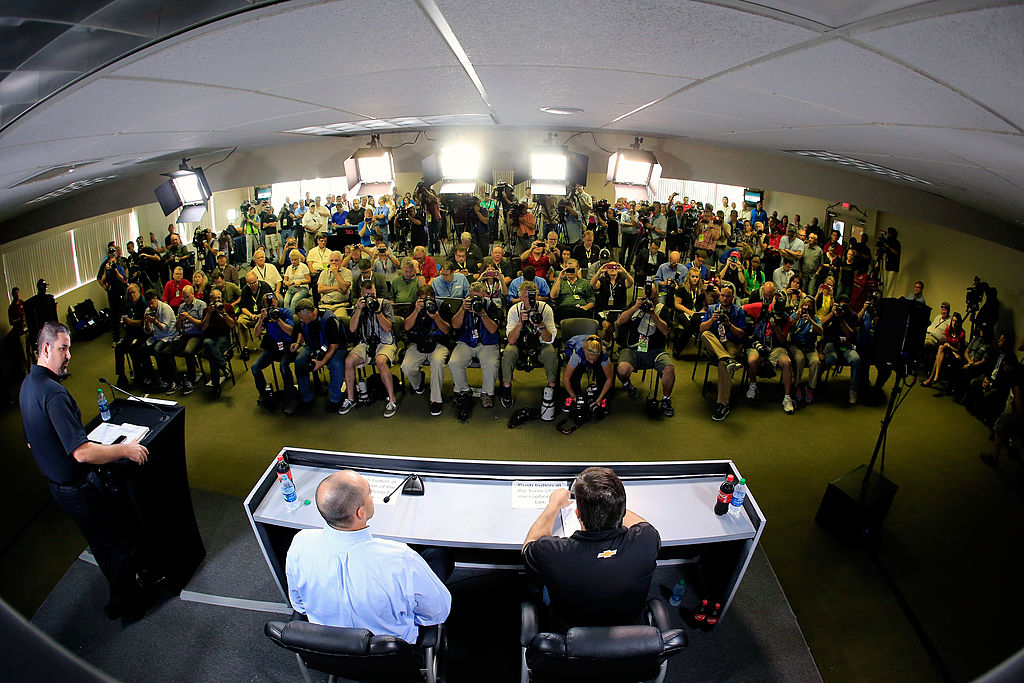 From the tragic deaths of basketball players Hank Gathers and Reggie Lewis, to the deaths of auto racers Dan Weldon and Dale Earnhardt and to Chuck Hughes who, in 1971, became the first and only NFL football player to die in a game, it is the media’s responsibility to navigate a tragedy on behalf of the public.

Research has shown that the media is often responsible for modeling appropriate public displays of emotion when traumatic or tragic events occur, be it respect for victims and their families or public mourning. It can be argued that the media – especially in the digital age – is a key conduit to community connection amid a tragedy, when people seek to show their support and share their grief.

There is a fine line when it comes to sports and catastrophe, for much of what people love about football is its warlike nature. Players are depicted like gladiators in a coliseum. Media quote athletes saying they will die for their teammates.

But when life and death become all too real, the athlete’s well-being takes precedence over wins and losses. At that point, the media, in my view, has one main job: help remind viewers of the player’s humanity.

As “SportsCenter” host Scott Van Pelt put it: “Sports is important. And suddenly it’s not.”