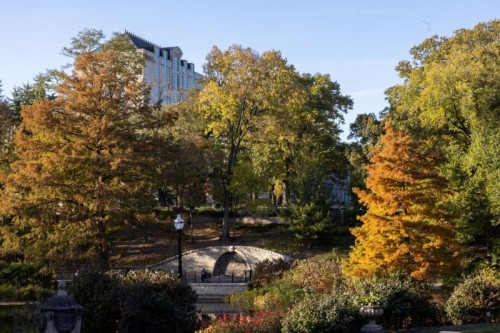 The Ohio State University’s carbon emissions fell by 30% since adopting sustainability goals in 2015, reflecting significant momentum as the university prepares to accelerate its progress.

The university’s current goal is to cut carbon emissions to zero by 2050, and President Kristina M. Johnson has directed leaders to develop an acceleration plan that would achieve net zero emissions 10 years earlier, in 2040. The acceleration plan will be based on operational, financial and environmental considerations.

The university’s carbon footprint is part of a broad set of sustainability goals that are designed to enhance Ohio State’s positive, lasting impact on global challenges including energy efficiency, reducing waste and addressing the consequences of climate change.

Jay Kasey, senior vice president of the Office of Administration and Planning, will review the university’s progress on resource stewardship this week with Ohio State’s Board of Trustees. In addition to the 30% carbon reduction, Ohio State has taken substantial steps to address other sustainability goals:

“Ohio State is dedicated to sustainability,” Kasey said. ”Our carbon footprint reductions show that we are taking action to produce tangible results.”

The university first established a long-term carbon neutrality goal in 2008. It was incorporated into the sustainability goals that the university set in 2015. Since then, the university has invested in hundreds of projects from smaller-but-impactful initiatives ­– such as converting light fixtures to LED technology and upgrading heating and cooling systems – to larger, multi-year building projects.

For example, the university is building a Combined Heat and Power Plant (CHP) that will help serve the Columbus campus and support expansion such as a new inpatient hospital and the Carmenton innovation district. The CHP requires less carbon-intensive fuel use than the traditional approach of having separate systems for power and heat.

Also under construction is the Energy Advancement and Innovation Center, which will be powered by rooftop solar energy. There, university and private sector researchers will work on the next generation of smart energy systems, renewable energy and green mobility solutions.

As Ohio State expands, it is taking steps to do so responsibly. Last year, the university implemented a new Sustainable Design and Construction Policy. The set of sustainability standards steers the university toward building and operating better performing facilities and a more sustainable physical environment while driving advancement toward sustainability goals.

Alongside Ohio State’s focus on operational improvements, students, faculty and staff are identifying solutions to address climate change and other challenges. Sustainability is addressed in more than 700 undergraduate courses on topics ranging from agriculture to engineering. For example, in Spring 2022, President Johnson and Kasey co-taught “Pathways to Net Zero Carbon Emissions” — a class in which students devised ways to reduce carbon emissions on campus.

For more information about the university’s sustainability goals, see Facilities Operations and Development and the Sustainability Institute at Ohio State.