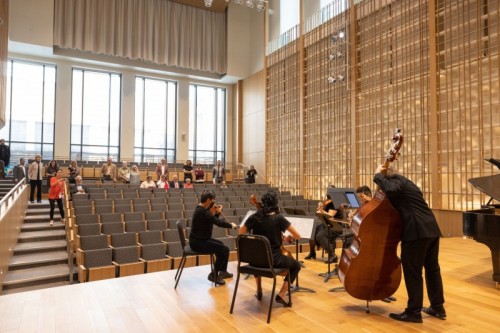 Timashev Family Music Building is for ‘everyone’

Michael Ibrahim, the newly appointed director of The Ohio State University School of Music, knew the university was special when he agreed to take the job last spring.

“When I took the position, I knew [Ohio State] was a step up,” he said. “But I wasn’t expecting this much of a step up. The robustness of the staff, the leadership, the institutional support – I couldn’t be more impressed.”

A prime example of that institutional support is the Timashev Family Music Building, which was officially dedicated on Sunday. Celebrations for the new space included remarks from President Kristina M. Johnson and Ibrahim, as well as performances from four School of Music groups: the wind symphony, the symphony orchestra, the jazz ensemble and the university’s choirs.

The new building, Johnson said, is “an opportunity to rededicate this university to our community and to the mission of uplifting, empowering and connecting people across the state and all over the world.”

Made possible through a donation from Ratmir Timashev, who earned his master’s degree in chemical physics at Ohio State in 1996, and his wife, Angela, the Timashev Family Music Building will house the entire school over five floors. The couple donated $17 million to the university in 2020, the majority of which went toward the building’s construction costs. They previously donated an additional $5 million in 2016 for endowed faculty positions, fellowships, scholarships and research support in chemical physics and data analytics.

“It’s my hope,” Timashev said at the dedication celebration, “that the Timashev Family Music Building inspires the next generation of students and this entire community to dream big and to achieve great things.”

The new building connects to Weigel Hall – which opened in the late 1970s – allowing both spaces to be used by the school. There are dedicated studios for jazz and percussion work, as well as practice rooms for students and a large ensemble rehearsal space. Ibrahim calls the acoustics in these new rooms “incredible.”

“If you have a singer in a room that echoes, that’s going to change how we hear sound. And, over the course of the four years a student is here, that’s going to affect how that student thinks about music, how they perform,” he said. “Acoustics are part of the instrument. Our halls are just stunning. They are musical spaces.” 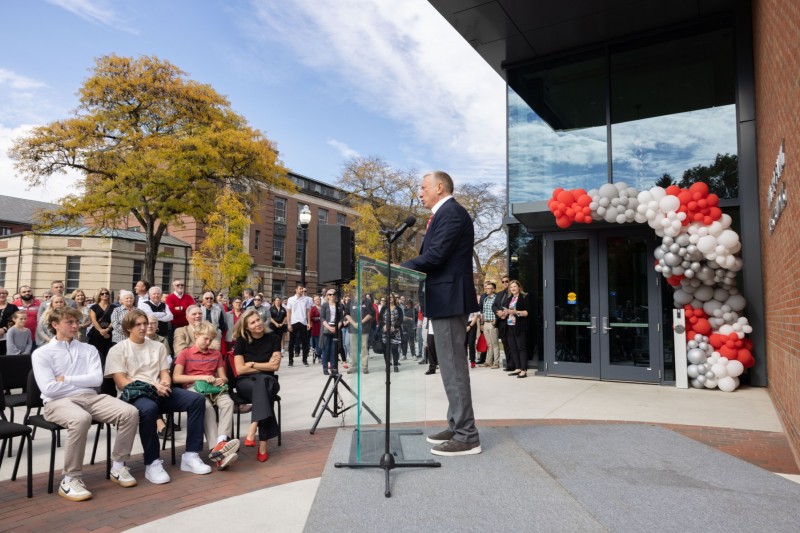 The centerpiece of the building is the 195-seat recital hall, which is Ibrahim’s favorite space.

“You walk in and even the sound of your voice, just talking, is amazing,” he said. “It’s special.”

For a new leader, the opening of a new building presents an opportunity, Ibrahim said, echoing Johnson’s sentiment.

“There’s only a certain timeframe where things can be considered new,” he said. “One of the things we’re doing is inviting people into the building. We want to bring the community in and together.”

He has worked to make the space, which only opened this fall, a place for Ohio State and Columbus community members alike. Building connections between the other arts organizations in the area is vital to Ibrahim’s plans for the school. Collaborations with ProMusica Columbus, the Columbus Symphony, the Columbus Children’s Theatre and Opera Columbus have already been established.

“We’re looking to build more partnerships,” he said. “We’re excited to build our community while this is new.”

This community is represented in another one of the building’s special features: congregate spaces.

“The heart of it all is the open spaces where students, faculty and staff can meet and prepare for class,” Ibrahim said. “As we come out of the pandemic, to have spaces where people can be together, not huddled at home, that’s so powerful.”

Music, Johnson said at the dedication, is a great unifier.

“It can bring people together, bridge differences, create pathways of understanding,” she said, adding, “The Timashev Family Music Building transforms all of this energy into a physical form. It will host and help inspire countless creative works, collaborations and opportunities for musicians of all levels to hone their craft – and enable those of us who may not be musically gifted to enjoy the creations of those who are.”

Ibrahim sees this new building as a way to fully integrate the School of Music into the fabric of Ohio State and the communities it serves.

“Our new facility is a musical and artistic space for everyone.”