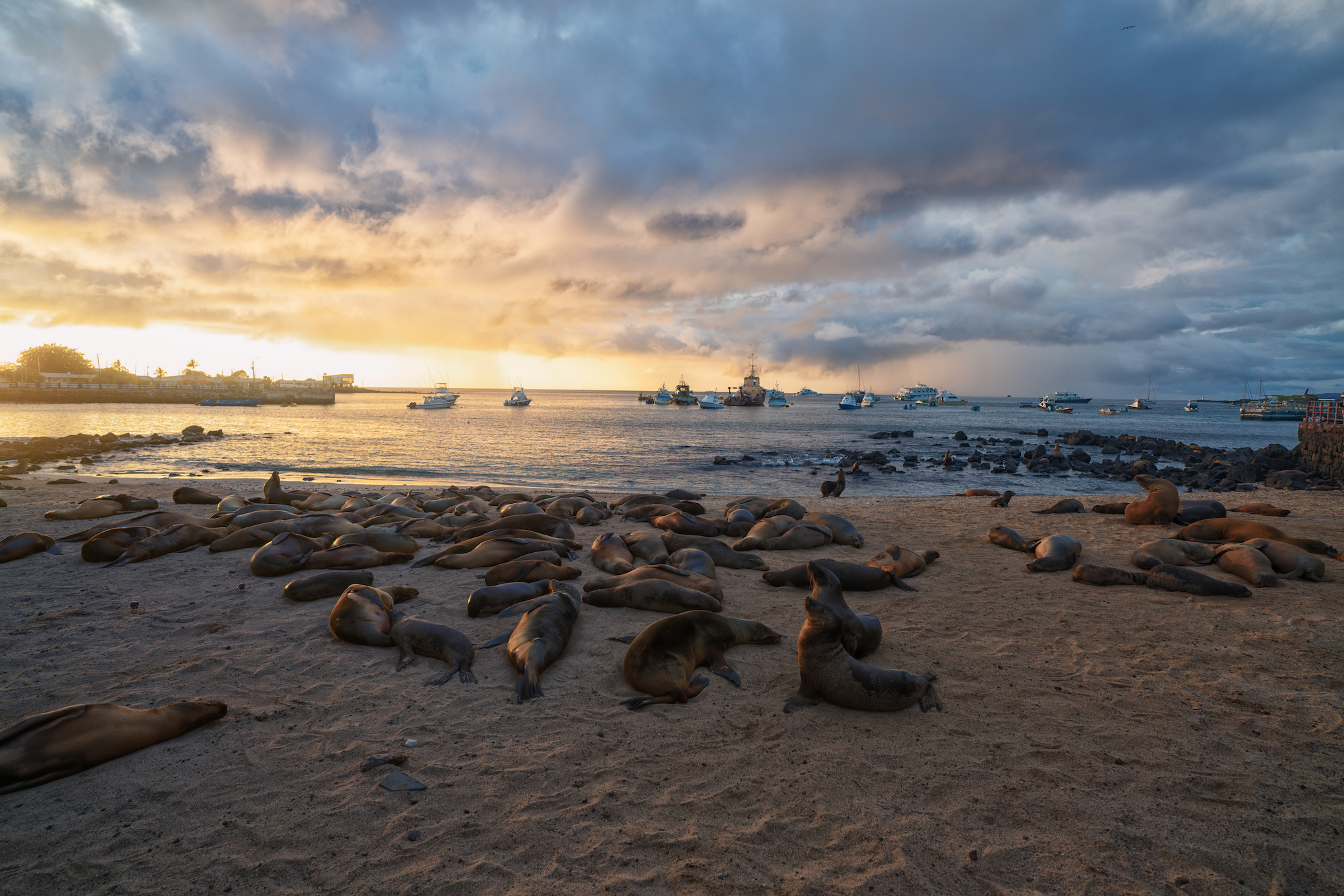 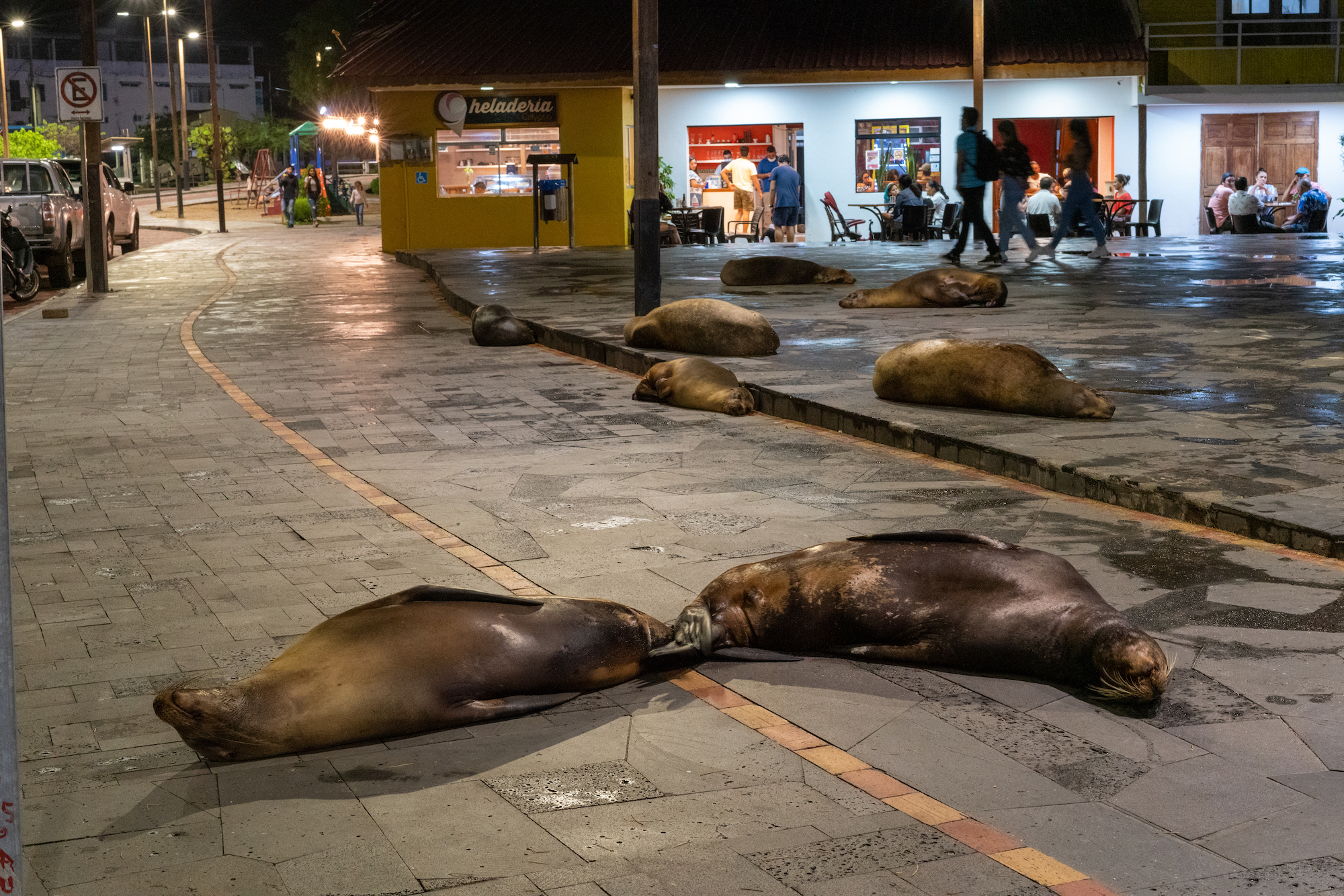 In the Galápagos, training community scientists to monitor water quality

The Galápagos Islands of Ecuador are synonymous with biodiversity and wildlife. Yet the islands are home to tens of thousands of people, too. On the islands’ beaches, humans and wildlife come into frequent, close contact.

During a recent visit to the Galápagos, Daniel Beiting of the School of Veterinary Medicine, along with Penn students and local collaborators, spent time investigating one of the consequences of human and wildlife cohabitation: sanitation challenges. Using portable molecular biology tools, the Penn scientists evaluated water quality and trained Galapagueño scientists and students to perform the same tests themselves.

Part of the larger Galapagos Education and Research Alliance (GERA), co-directed by the School of Arts & Sciences’ Michael Weisberg, a goal of this project is to empower residents with the knowledge and capacity to keep tabs on water quality in their own home, contributing to environmental and public health research.

“With so much of the Galapagos being protected national parks—areas that can’t be used for agriculture, recreation, camping, and that even residents have to have a guide to enter—it creates this tension,” says Beiting, a Penn Vet assistant professor. “There is this situation where many of the people who you might want to advocate for the Galápagos haven’t experienced it to its fullest potential. When I first started talking with Michael about what we could do, he was very excited about working with local stakeholders and giving them the tools to do the science themselves.”

Beiting’s expertise lies in using genomic and bioinformatic tools to probe questions in microbiology and immunology. In ongoing work, including some in remote parts of Brazil, Beiting and Penn Vet professor Phillip Scott, have used a portable system for conducting quantitative polymerase chain reactions (qPCR), a way of assessing and identifying genetic material in a given sample. The equipment, provided by the biotechnology company Biomeme, can be set up on a tabletop and doesn’t require refrigeration or electricity.

In 2019, Beiting and Weisberg began having discussions about working together, seeing an opportunity to deploy the portable qPCR technology to begin to ask and answer questions about water quality with a system that could be leveraged by people living in the Galápagos themselves. The project befitted an overarching aim of GERA, which has been active for the last seven years: to develop alliances between Penn and the Galápagos to protect the health and resiliency of the islands’ human and wildlife residents.

“All of our work in Galápagos is based around the idea of social ecology,” says Weisberg. “If we want to protect the environment, we need to engage the people living in that environment, integrating their aspirations and knowledge with ours. In this incredible project, Dan and our team are supporting the community of San Cristóbal in researching one of their greatest concerns: their impact on drinking water and the ocean.”

In early March, Beiting traveled to San Cristóbal Island with a group that included M.D./Ph.D. student Victoria Moffitt and Luella Allen-Waller of the School of Arts & Sciences Biology Department, as well as other Penn students. Once there, the group engaged with Ernesto Vaca, a naturalist and guide who co-directs GERA.

The team spent the week exploring the island. They discussed how microbiological assays could complement ongoing work by GERA to do community science projects focused on biodiversity planning. And they collected water samples from various beaches and optimized their water sampling and testing protocol.

“We wanted to make it simple enough that you could task young students to go out, process water samples, extract DNA, and run a qPCR with a teacher guiding them,” says Beiting.

The assay they used is designed to look for fecal contamination in water samples. Importantly, it can distinguish between human and animal fecal material.

“That was intentional,” Beiting says. “We wanted that particular distinction because there are a huge number of sea lions and huge amounts of their poop everywhere.”

After firming up their process, the team was ready to equip others to perform the same types of analyses. Working with Vaca, Beiting and the Penn students met with a group of roughly 40 scouts, ranging in age from about 9 to 18.

Before diving into the experimentation, they first surveyed the students about water and health. “We asked them for their perspectives on water around the island,” Beiting says. “What beaches do they use, do they think the water is clean, do they drink water from the tap? We wanted to understand their perceptions of water. Then we asked how they might know whether water is clean, pushing them to think about microbes and DNA.”

With that background in hand, the students were ready to get hands-on. Using marine water samples collected by the Penn scientists, the scouts extracted DNA and set up a qPCR device to test for the fecal biomarkers. They tested water samples from beaches used primarily by people, beaches that were exclusively the domain of sea lions, and beaches that were used by both the marine mammals and humans. They also tested municipal tap water.

While such community engagement may eventually lead to action on public health concerns in the Galápagos, a more primary goal is to spark curiosity among young people living on the islands to engage in science that could inform their communities and perhaps set them down a path to a career in research, Beiting says.

“The students had so many questions about whether the water is safe to drink, to swim in,” he says. “We told them we don’t have the data to answer these yet, but I’m gratified that the project is stimulating these sorts of questions.”

A group from Penn including Moffitt, GERA lab manager Maddie Tilyou, and others will be heading back to San Cristóbal this summer to continue water quality testing workshops as well as furthering other GERA initiatives. Closer to home, Beiting is hoping to extend these field sampling techniques and educational efforts, perhaps launching new community science projects. In the meantime, he is applying the portable technology to his own research in conjunction with the Penn Vet’s Institute for Infectious and Zoonotic Diseases, on white-nose syndrome in bats.

Another trip the Galápagos may be in Beiting’s future, however.

“I am just fascinated by one of the most intense interactions between humans and marine mammals that likely exists on the planet and what that might mean for ecosystem health and public health,” he says.

Daniel Beiting is an assistant professor in the School of Veterinary Medicine’s Department of Pathobiology at Penn.

Michael Weisberg is the Bess W. Heyman President’s Distinguished Professor and chair of the Philosophy Department in Penn’s School of Arts & Sciences.