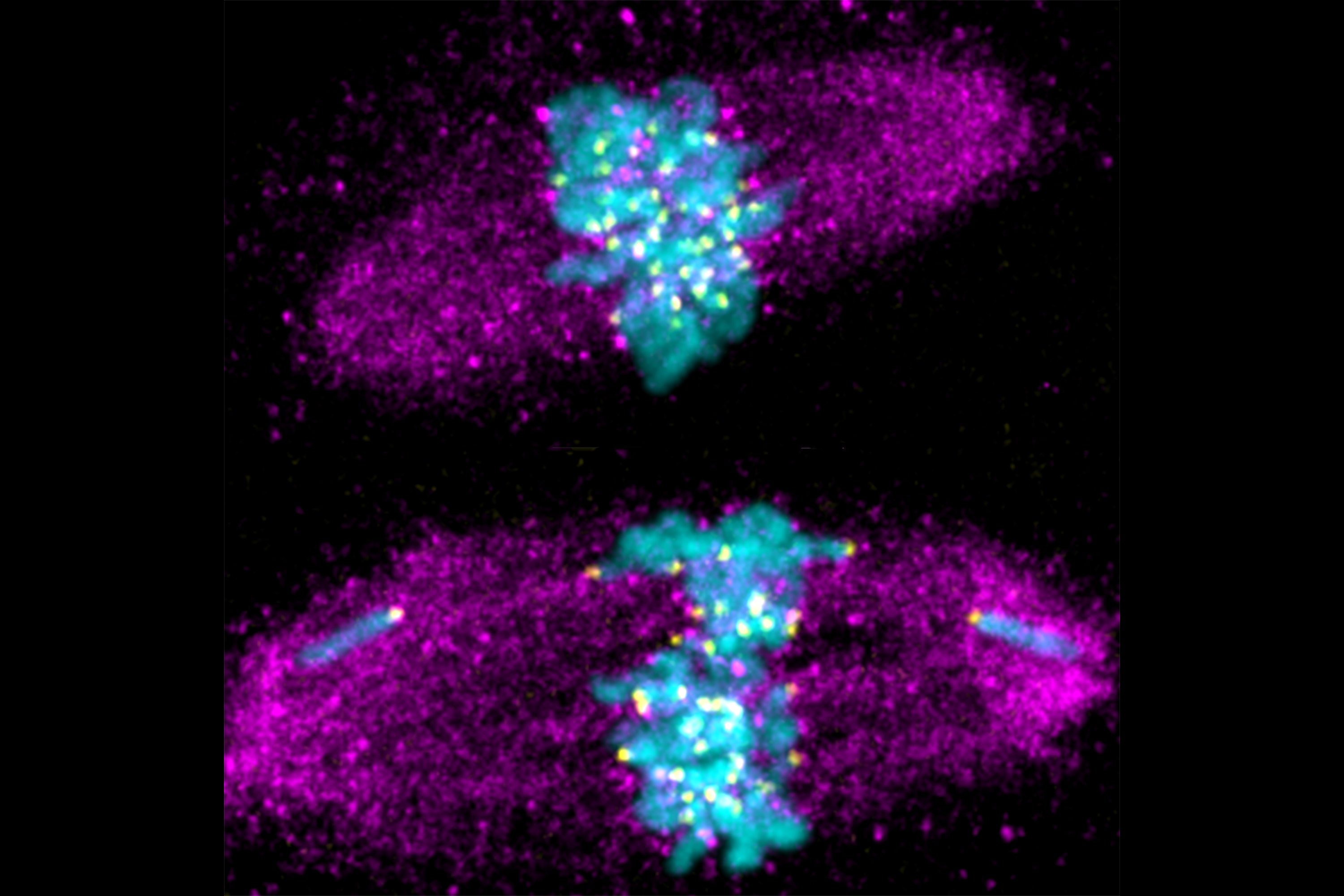 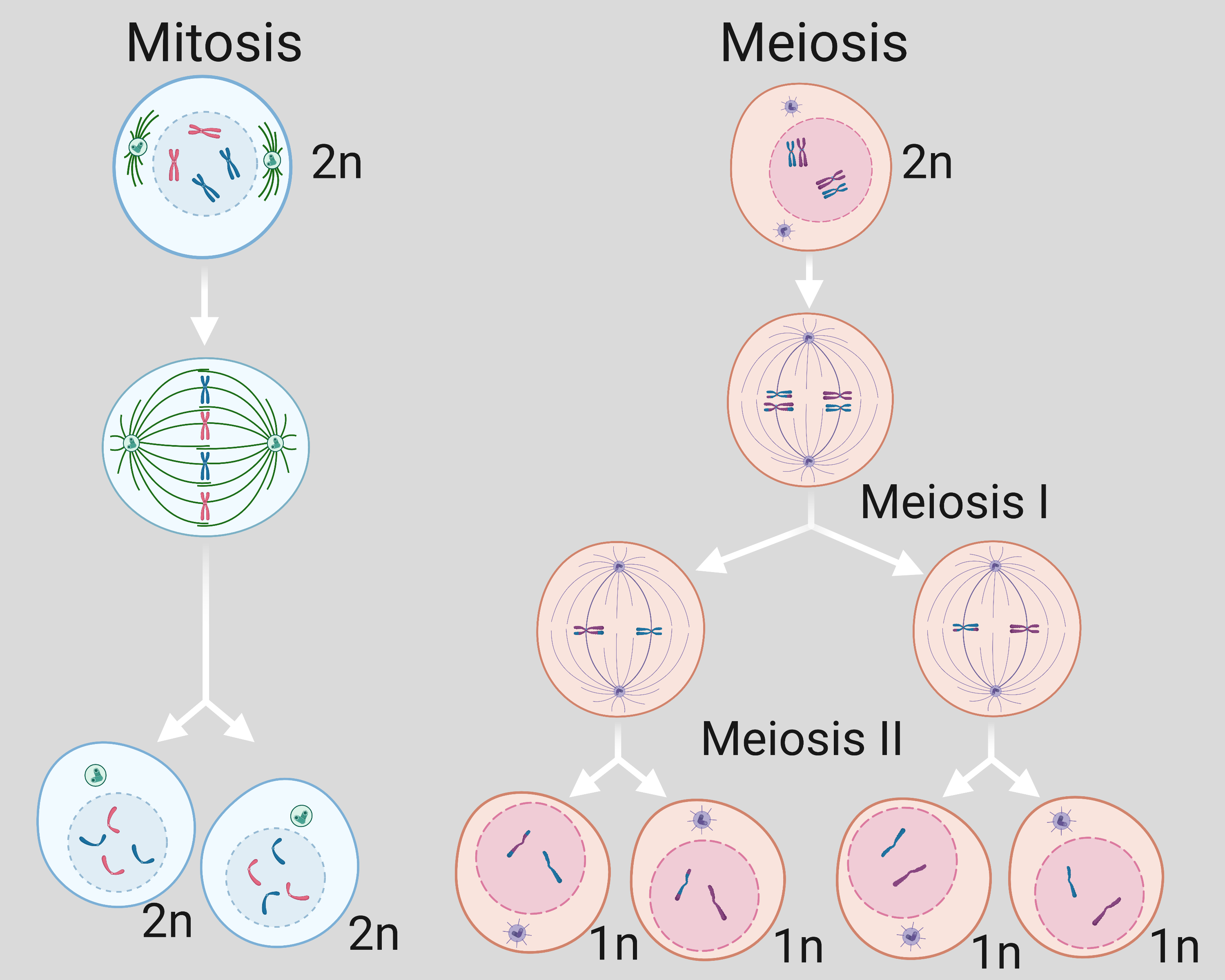 To create eggs and sperm, cells must rewire the process of cell division.

Mitosis, the common type of cell division that human bodies use to grow everything from organs to fingernails and to replace aging cells, produces two daughter cells with the same number of chromosomes and approximately the same DNA sequence as the original cell. Meiosis, the specialized cell division that makes egg and sperm in two rounds of cell division, creates four granddaughter cells with new variations in their DNA sequence and half as many chromosomes in each cell. Meiosis uses most of the same cellular machinery as mitosis to achieve this very different outcome; only a few key molecular players prompt the rewiring from one type of division to another.

One such key player is the protein Meikin, which is found exclusively in cells undergoing meiosis. New research from Penn’s Michael Lampson and Jun Ma, collaborating with Whitehead Institute Member Iain Cheeseman and graduate student Nolan Maier, demonstrates how Meikin is elegantly controlled and sheds light on how the protein acts to serve multiple roles during different stages of meiosis.

The findings, which appear in the journal Developmental Cell, reveal that Meikin is precisely cut in half midway through meiosis. Instead of this destroying the protein, one half of the molecule, known as C-Meikin, goes on to play a critical role as a previously hidden protein actor in meiosis.

“It was a pleasure working together to understand how some of the specialized meiotic functions that are necessary for making healthy eggs and sperm are controlled,” says Lampson, a professor of biology in the School of Arts & Sciences.

“Cells have this fundamental process, mitosis, during which they have to divide chromosomes evenly or it will cause serious problems like cancer, so the system has to be very robust,” Maier says. “What’s incredible is that you can add one or two unique meiotic proteins like Meikin and dramatically change the whole system very quickly.”

During both mitosis and meiosis, sister chromatids—copies of the same chromosome—pair up to form the familiar “X” shape of a chromosome. In mitosis, each chromatid—each half of the X—is connected to a sort of cellular fishing line ,and these lines reel the chromatids to opposite ends of the cell, where the two new cells are formed around them.

In the first round of division in meiosis, however, the sister chromatids stick together, and one whole “X” is reeled into each new cell. Meikin helps to achieve this different outcome by ensuring that, while the chromosomes are being unstuck from each other in preparation for being pulled apart, each pair of sister chromatids stays glued together in the right place. Meikin also helps ensure that certain cellular machinery on the sister chromatids is fused so that they will connect to the same line and be reeled together to the same side of the cell.

More specifically, when chromosomes are first paired up, they are glued together by adhesive molecules in three regions: the centromere, or center of the X, where Meikin localizes; the region around the center; and the arms of the X. In the first round of meiosis, Meikin helps to keep the glue in the region around the center intact so the sister chromatids will stick together. Simultaneously, Meikin helps prime the center region to be unglued, while a separate process unglues the arms. This ungluing allows the chromosomes to separate and be prepared for later stages of meiosis.

Cheeseman and Maier initially predicted that Meikin’s role ended after meiosis I, the first round of meiotic cell division. In meiosis II, the second round of cell division, the cells being created should end up with only one sister chromatid each, and so the chromatids must not be kept glued together. Maier found that near the end of meiosis I Meikin is cleaved in two by an enzyme called Separase, the same molecule that cleaves the adhesive molecules gluing together the chromosomes. At first, this cleavage seemed like the end of Meikin and the end of this story.

However, unexpectedly, the researchers found that cells lacking Meikin during the second half of meiosis do not divide properly, prompting them to take another look at what happens to Meikin after it gets cleaved. They found that Separase cleaves Meikin at a specific point--carving it with the precision of a surgeon’s scalpel—to create C-Meikin, a previously unknown protein that turns out to be necessary for meiosis II. C-Meikin has many of the same properties as the intact Meikin molecule, but it is just different enough to take on a different role: helping to make sure that the chromosomes align properly before their final division.

“There’s a lot of protein diversity in cells that you would never see if you don’t go looking for it, if you only look at the DNA or RNA. In this case, Separase is creating a completely different protein variant of Meikin than can function differently in meiosis II,” says Cheeseman, who is also a professor of biology at the Massachusetts Institute of Technology. “I’m very excited to see what we might discover about other hidden protein forms in cell division.”

Answering the question of Meikin’s role and regulation throughout meiosis required a close collaboration and partnership between Maier and Lampson lab senior research scientist Ma, the Lampson lab being experts on studying meiosis using mouse models. Working with mouse oocytes, or immature egg cells, Ma was able to reveal the behaviors and critical contributions of Meikin cleavage in meiotic cells in mice. Both labs credit the close exchange with helping them to get a deeper understanding of how cells rewire for meiosis.

Once cells have completed these specialized meiotic divisions, the researchers found that it was critical for oocytes to fully eliminate Meikin. They determined that, after meiosis II, C-Meikin is degraded by another molecule, the anaphase-promoting complex or APC/C—this time for good. With Meikin gone and the rewiring of cell division reversed, eggs and sperm are ready for mitosis; should they fuse and form an embryo, that is the next cell division they will undergo. The researchers note that the way Meikin is regulated by being broken down—first into C-Meikin and then completely—may help cells to organize their timing during meiosis. Breaking apart a protein is an irreversible step that creates a clear demarcation between before and after in a multi-step process.

The researchers hope that by uncovering the intricacies of meiosis, they may shed light on what happens when the creation of eggs and sperm goes wrong and perhaps contribute to the understanding of infertility.

The study was supported by grants from The Harold G & Leila Y. Mathers Charitable Foundation, the National Science Foundation (Grant 2029868), a Pilot award from the Global Consortium for Reproductive Longevity and Equity, the National Institutes of Health (GM126930 and GM122475), and the Henry and Frances Keany Rickard Fund Fellowship from the MIT Office of Graduate Education.