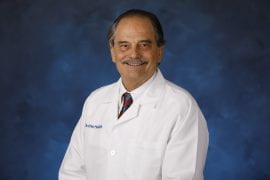 Marquis Vawter, Ph.D., research professor in the Department of Psychiatry & Human Behavior at the UCI School of Medicine, participated in companion studies published in Nature, analyzing regions of the human genome associated with increased risk of schizophrenia. Researchers knew that the disorder carries a 60 to 80 percent inheritability and wanted to determine common and rare risk factors involving one or more genes. Both studies were led by researchers at Wales’ Cardiff University and the Broad Institute of MIT and Harvard. Vawter’s role was to confirm the schizophrenia diagnosis according to strict criteria accepted in the psychiatric genetics community, while his lab extracted and purified high-quality DNA and transmitted the samples to the National Institute of Mental Health Repository & Genomics Resource. The team located 287 regions in the genome and identified more than 120 genes significantly associated with risk. In the companion study, extremely rare protein-disrupting mutations in 10 genes were discovered that elevate the lifetime chance of developing schizophrenia up to 50 percent. “The protein modifications are ultra-rare and therefore unlikely to account for more than a small percentage of individuals with the illness,” Vawter says. “However, both studies ascribe genes in neurons with synaptic biology functions as increasing the lifetime risk of schizophrenia onset.” The studies were funded by grants from the NIMH and involved more than 460,000 participants.