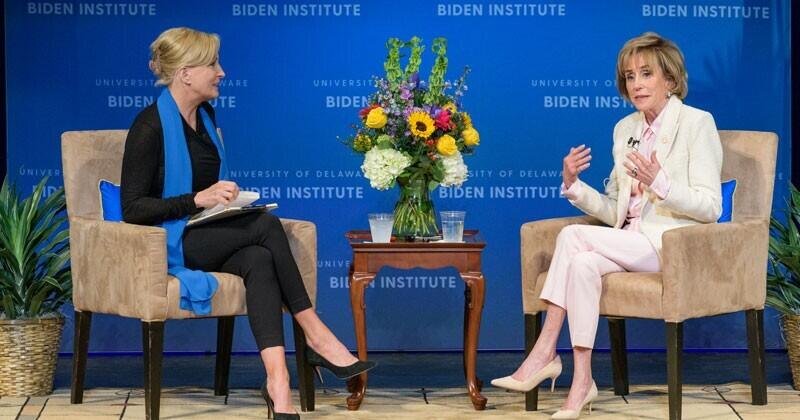 Valerie Biden Owens, author of the new memoir Growing Up Biden, might have given away the recipe during a recent chat at Mitchell Hall with “Morning Joe” co-host Mika Brzezinski.

“As our mom said, family is the beginning, the middle and the end,” Biden Owens said. “The question that I’m most often asked is, ‘What’s the message? What do you want people to take away from the book?’ And there’s really no message other than the magic of family.”

Brzenzinski, who walked on stage with her husband and co-host Joe Scarborough waving from her phone, believes there is more to it. She knows the Biden family and its history, which is one of a “good, caring, loving, tight family at times really going through some really, really rough spots,” Brzezinski said. She knows there is a unifying force.

“You are the glue, in many ways. There are these moments in the Biden journey – and that is the journey of your brother, the president of the United States – where the family meets with calamity, and the worst moment a family could confront,” Brzenzinski said. “Everybody has a role in this journey. You are the glue.”

Brzenzinski was referring to the 1972 accident that claimed the lives of Joe Biden’s first wife, Neilia, and daughter, Amy, and left sons Beau and Hunter Biden seriously injured. When Joe Biden heard the news, Biden Owens was with him, guiding him from Washington, D.C., back to Delaware and “trying to get him on the plane … white knuckling it all the way home. You’re in that vortex with him,” Brzenzinski said.

Biden Owens pointed to the role of her brother, Jimmy, and lessons handed down from her parents. They told their kids that all families encounter tragedy, and the best of them step up to the plate and help the ones who are wounded or suffering. That family burdens are shared, just like a marriage, where it’s never actually 50-50, but sometimes 97-3 or 100-0.

“It doesn't matter how many times you get knocked down; it matters how quickly you get up,” was another oft-repeated Biden-ism attributed to their father, Joseph R. Biden Sr.

This wisdom was embedded in Biden Owens during her formative years, first in Claymont, then in Arden and eventually in North Wilmington. Readers of the book who are from Delaware will recognize many places and landmarks, including the legendary Charcoal Pit on Concord Pike, a place where the Bidens would hang out as kids and Biden would one day take President Obama when he was vice president. 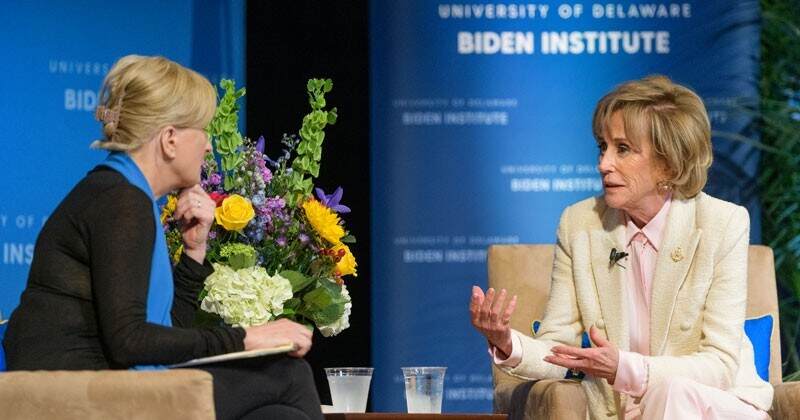 "It doesn't matter how many times you get knocked down; it matters how quickly you get up," Biden Owens tells Brzenzinski.

After earning her degree from the University of Delaware in 1967, she became a teacher at Wilmington Friends School. She was a driving force behind the earliest family triumph, serving as campaign manager for Biden’s upset victory in a 1972 U.S. Senate race that he won by 3,163 votes. Like any family success or tragedy, it was an all-hands-on deck effort. Biden Owens had the clever idea of recruiting some of her students to help.

Biden Owens handled the job of campaign manager ever since, all the way up until the 2020 election, when she served as campaign co-chair. She said 2020 was the first time she wasn’t gung-ho about her brother running. She feared that Donald Trump would try to destroy Biden and his family in an ugly campaign.

“I thought, you know, why? You know, Joe, you’ve done it. Why don’t you get that beach house and let me come and stay there?” she said. “But it was Charlottesville, when they marched with torches and chants ... Joe said, ‘Val, I can’t back away.’ It was ugly. But then it [the ugliness of the campaign] exceeded my expectations. He’s the right man at the right time for all the right reasons.”

Toward the end of the evening, Biden Owens and Brzenzinski shared their challenges as working mothers. As she often does, Biden Owens switched chairs – figuratively – and became the interviewer. She asked Brzenzinski about a very near tragedy when she fell down the stairs while holding her baby. Luckily, her child escaped serious injury. Brzenzinski believes the accident occurred because she was taking on too much, making it impossible to balance work and life demands. She said the ordeal was a wakeup call for her.

“It was an incredible lesson for young women to really listen to your body, listen to what you need, pace yourself. You have a long time. Simmer down, you know, don't be a control freak,” Brzenzinski said. “You have to take your time, there isn't a rush. And it was one of a number of challenges I faced … should I go back, you know, after allowing something like that to happen?”

While reminding women to pump the brakes when necessary, the duo also gave them the green light to hit the gas and grab an opportunity when it presented itself. During the Q&A portion of the evening, Cyndie Romer, a Newark resident who is running for state representative in Delaware’s 25th district, seized the opportunity by stumping for herself and asking for advice for a first-time candidate. “I just love that you’re stepping up and running. We need lots of women, right?” Brzenzinski said.

But the mastermind behind Biden’s first-ever political win had some advice for all new candidates.

“There are two things which I say to any first-time candidate, man or a woman … ‘ask yourself what is it worth losing over. [Meaning] where will you stand, that’s worth losing over.’ The second one is ‘get your personal life in order.’ It’s hard enough outside in the environment, in the political world, because you have incoming from all areas,” Biden Owens told the audience. “If your spouse, your significant other, your family, if your parents are elderly, if you’ve got little babies … whatever it is. If you don't have that support, you are making your life so much more difficult because you have to have a respite when you come home. 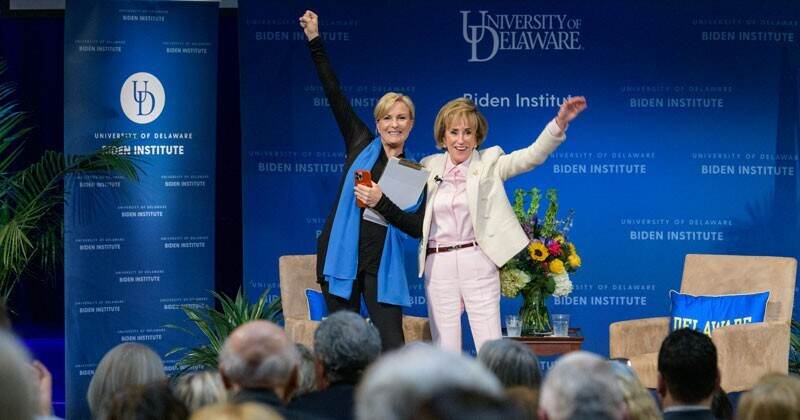 Brzezinski and Biden Owens wave to the UD crowd that gathered to hear from Biden Owens about her new memoir 'Growing Up Biden' and her life experiences.