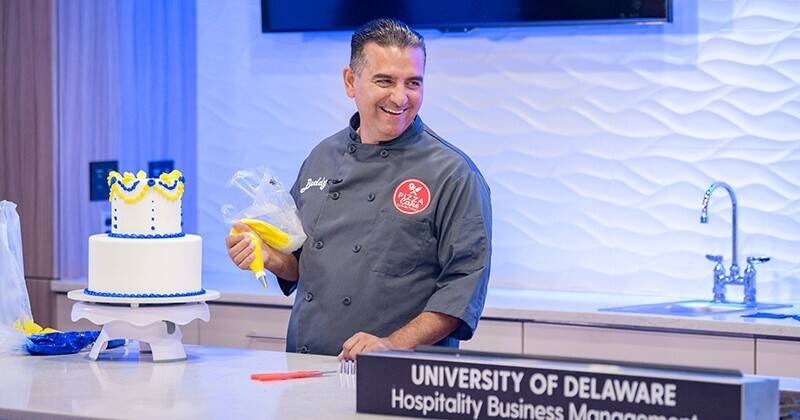 To be successful in business it’s a good idea to learn from people who have actually mastered it. Lerner College students got a chance to talk shop with Cake Boss Buddy Valastro recently.

Buddy Valastro is a modest giant in the baking world. After almost 30 years of running his family business and making tasty treats that people have enjoyed across the globe, he can share with anyone his experience from humble beginnings to world famous culinary entrepreneur.

“I never say that we have the best, but I know enough about the science of it,” Valastro said recently, when he spoke to a group of University of Delaware students.

Valastro, who has multiple TV shows, bakeries and restaurants, was generous with his time recently when he spoke to two groups of students from the Alfred Lerner College of Business and Economics. His visit was part of the Paul Wise Executive Speaker Series, hosted by  Lerner College’s Department of Hospitality and Sports Business Management.

Valastro, whose daughter Sophia is a UD student and sophomore majoring in hospitality business management, traveled from New Jersey with his wife  to talk about his journey and answer questions from students and staff. He later did a cake decorating demonstration at Vita Nova, UD’s student-run gourmet restaurant.

“The principles of me are that you have to dream big. You have to work hard and you have to be willing to do the dirty work,” Valastro said.

Valastro was the son of a baker. He assumed his role as leader of his family’s business, Carlo’s Bakery, at 17 when his father died of cancer and he had to drop out of school to operate the family business. He called the last 30 years the school of hard knocks, as he built his brand to what it is now, brick by brick. His empire includes 1,000 employees, a 100,000-square-foot  bakery manufacturing facility in New Jersey, 13 bakeries in the United States and Canada, seven in Brazil, and a full service restaurant in The Venetian Resort in Las Vegas, 50 cake vending machines in North America, a food truck and a TV and movie production company.

“Chaos soothes me,” Valastro said. “I like to hear problems and have 10 different things going on and I’m like okay, do this, do that, and I need people around me who (follow the)  beat to the same drum.”

Valastro gave students insight into how he stays humble even after becoming a highly successful business entrepreneur, and how he continues to expand and find new ways to scale up and stretch his brand. For starters, he is still not afraid to get his hands dirty and do the hard work. It was a virtue that his father taught him early, to take pride in every job that he did and that way he would always be successful.

“To this day, If I’m at my factory, I will still get down on my hands and knees to scrub the floor if I have to…because if you want your employees to do it and they see that you do it, then they’re going to do it. I would never ask an employee to do something that I wouldn’t do myself,” he said.

A self-proclaimed obsessive compulsive person, Valastro said he notices everything from missing inventory at work, to stains on light fixtures at home. He has anxiety and had to learn over the years to spot it when he knew that an episode was coming, and to control his breathing so he could still function.

Valastro also pays attention to the possible ways that  his business could grow. Online seems to be next. The pandemic hit his business hard, but to get everyone paid he had to find a way to ship cakes, cookies and cannolis. He is proud of one of his popular ventures, cake vending machines, which he plans to install on UD’s campus. He is expanding his brand through automated retail machines.

He recently signed a deal with A&E network to do 60 hours of television programming over the next two years. He’s still finalizing concepts for the content.

Valastro urged students to chase their dreams fearlessly and if entrepreneurship was in their plans, to have a value system to live by as they move through life and business. Always honor contracts and the word you give. Learn from mistakes and don’t beat yourself up over them. Never be too proud to admit when you’ve made a mistake and you have to pivot in a different direction to save yourself from complete disaster. These were some of the lessons he told a crowded room of people in Purnell Hall.

Valastro encouraged hospitality business management students to be prepared to work hard, more than 40 hours a week at something, if they wanted to be great at it. Years of experience is what has given him muscle memory when piping fondant on cakes and making fancy designs. He can tell you viscosity, aeration and the exact percentage each needs to be to make a perfect batch of cake.

“Successful hospitality business leaders and entrepreneurs share their stories and experiences in a way that supports our students’ hospitality education. Guest speakers such as Buddy Valastro also excite and inspire students by sharing their passion and extensive industry knowledge,” said Lerner Deputy Dean and Aramark Chaired Professor Sheryl Kline.  “It is my hope that students make a connection with these speakers whether it's identifying with them as someone who is like them and is successful or connecting the speaker’s presentation content with the theory and material in the textbook and classroom discussions.”

Guy Rettig, a freshman hospitality business management major, attended the presentation and demonstration. He said that he was thoroughly impressed by Valastro.

“I thought the presentation was amazing and it was captivating to listen to Buddy Valastro,” Rettig said. “From his father passing away leading to dropping out of high school to run the bakery, to being selected for magazines, to becoming a celebrity chef on TV. One thing that made his speech so meaningful was that when asked a question, he would make direct eye contact and almost answer it like it was just a conversation.”

Rettig said that he loves to cook but that he is not a good baker.  After watching Valastro decorate a cake at Vita Nova he was inspired to try baking again.

Recently, Valastro said that he learned that he had to make more time for balance in his life to spend time with his wife and children. He reduced television filming from 11 to four months of the year. COVID helped him realize that he couldn’t keep up such a crazy schedule, and he missed one too many soccer games for his kids.

“You have to have life balance,” Valastro said. “My biggest accomplishment out of anything that I got is my wife and my four kids. Having a wife that is supportive, I don’t know how I would do it if I didn’t have her,” he added, while smiling at his wife in the crowd. Valastro said that he is not pushing his children to take over the business but that he expanded into various areas of business in case they wanted to chase a dream in a field that he works in.

During his demonstration at Vita Nova, Valastro invited Sophia to the front of the class with him and looked on as a proud dad when she used yellow and blue buttercream icing to decorate a cake in UD’s colors. He took pictures with students at both sessions and provided an assortment of cakes and treats from his bakeries after the demonstration was over.