Honorary degrees to be awarded at Commencement 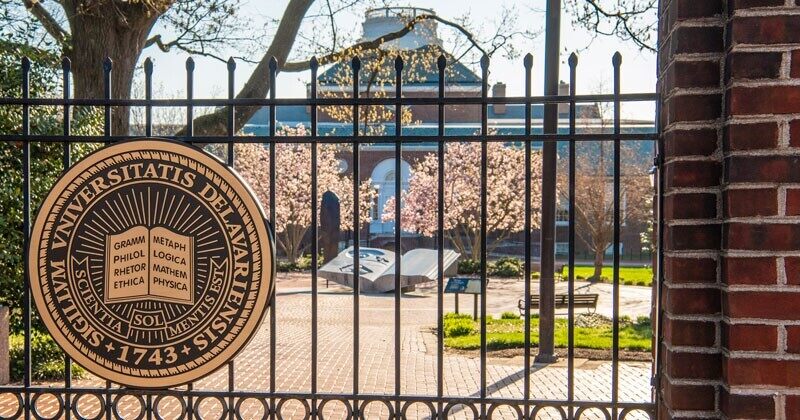 Five individuals will recognized by the University of Delaware with the awarding of honorary degrees at the University’s Commencement ceremony on May 28.

This year’s class, approved by the Board of Trustees at its spring meeting, are Arup K. Chakraborty, alumnus and director of the Institute for Medical Engineering and Science and Institute Professor at the Massachusetts Institute of Technology; Theresa J. Rebeck, award-winning playwright; Gerret Van S. Copeland, philanthropist and UD instructor; Tatiana B. Copeland, philanthropist; and the late James E. Newton, professor emeritus of Africana studies. Dr. Newton, who died May 24, 2022, will be recognized in a ceremony later.

A pioneering researcher, Chakraborty supervises and collaborates with researchers in the Chakraborty Group, which brings together approaches from immunology, physics and engineering. His research focuses on understanding the mechanistic underpinnings of the adaptive immune response to pathogens and harnessing this knowledge to help design better vaccines and therapies, with a focus on HIV and influenza. A hallmark of his research is the close synergy and collaboration between his lab’s theoretical and computational studies and investigations led by experimental and clinical biologists.

Honored as a professor and mentor, he teaches at both the undergraduate and graduate levels and has given lectures throughout the world. Chakraborty has received several teaching awards, including most recently the Outstanding Graduate Teaching Award from the MIT Chemical Engineering Department in 2020 and 2021.

Rebeck, who is receiving an Honorary Doctor of Fine Arts, is a prolific playwright whose works have been produced on and off-Broadway, throughout the United States and abroad. When her play Bernhardt/Hamlet premiered on Broadway in 2018, it marked her fourth Broadway production and made her the most Broadway-produced female playwright of our time. A finalist for the Pulitzer Prize for her play Omnium Gathering, she has won a National Theater Conference Award and several other playwriting honors.

Four of Rebeck’s works have had their world premieres on campus, presented by UD’s professional theatre training program, the Resident Ensemble Players. Her archives are housed in Special Collections at the University of Delaware Library.

A lauded writer for television and film, Rebeck created and executive produced the television musical series Smash and has written for many series, including Law and Order: Criminal Intent, Third Watch, L.A. Law, Brooklyn Bridge and others. Her writing for NYPD Blue earned her numerous awards, including a Peabody, the Mystery Writers of America’s Edgar Award and the Hispanic Images Imagen Award. Her films credits include Harriet the Spy, Gossip, Catwoman and the recent thriller The 355. She is also the author of three novels and the nonfiction book, Free Fire Zone: A Playwright’s Adventures on the Creative Battlefield of Film, TV and Theater.

Copeland, an accomplished business executive and owner and president of Rokeby Realty Company, is receiving an Honorary Doctor of Humane Letters.

A wine lover, he and his wife, Tatiana, founded the Napa Valley winery Bouchaine Vineyards, for which he serves as chairman. For 14 years, he has been a guest lecturer in the field of wine at the University.

As a passionate conservationist, he and his cousin, the late George “Frolic” Weymouth, formed the Brandywine Conservancy, which has protected nearly 65,000 acres in Delaware and Pennsylvania from development. The Conservancy is a leading local and national advocate for responsible land use, open space preservation and water protection.

Copeland grew up on the property now known as the Mount Cuba Center, and he has long worked with this noted horticultural center. He is also active with Longwood Gardens and serves on its Board of Trustees.

A noted philanthropist, he is a dedicated supporter of the Delaware Art Museum and currently chairs its Board of Trustees. He and his wife are also champions of the performing arts in Delaware.

A cosmopolitan businesswoman who speaks five languages, Copeland is receiving an Honorary Doctor of Humane Letters.

As patrons of the arts, she and her husband, Gerret, have supported live musical and theatrical performances. A member of the board of the Grand Opera House, she is a past chairman and president of the Delaware Symphony Association and a past national trustee of the National Symphony Orchestra. She also helped finance the renovation of the Playhouse at Rodney Square.

A champion of the Delaware community, she and her husband have shared their time, money and expertise with dozens of local and regional nonprofits, including the University of Delaware. The Copelands are also great dog lovers and created a fund to help pet owners afford veterinary care.

Her support was key to the state getting its own tall ship, the Kalmar Nyckel, a replica of the ship that brought the original European settlers to Wilmington in 1638. Her likeness graces the prow of that ship, and she was knighted by the king of Sweden with the Royal Order of the Polar Star.

An award-winning artist and a long-time member of the University of Delaware faculty, Dr. Newton will be awarded the Honorary Doctor of Humane Letters posthumously. Dr. Newton retired from the University in 2005 after a 33-year career that included directing the Department of Black American Studies, now the Department of Africana Studies, and chairing the Commission to Promote Racial and Cultural Diversity. At the University, he was recognized with the Excellence in Teaching Award, the Black Student Union Faculty Award, an award for teaching excellence from the Mortar Board honor society and the Louis L. Redding Diversity Award.

He is the author of The Principles of Diversity: Handbook for a Diversity-Friendly America and A Curriculum Evaluation on Student Knowledge of Afro-American Life and History, as well as several articles on multicultural education, African American art and diversity. He also wrote more than 30 articles on Black Delawareans. In addition, he co-edited The Other Slaves: Mechanics, Artisans and Craftsmen, and he won first-prize awards in sculpture and graphics in the National African American Art Exhibition in Atlanta.