Video on UD police dog being fitted with Kevlar sweater to protect against bombs and stabbings.: youtube.com/watch?v=SI7tLU33RM0

The nose knows, and Jetta’s got one of the best.

Fall is one of her busiest times of year. The University of Delaware Police K9 spends many Saturdays sweeping Delaware Stadium ahead of football games. She ensures the stadium is clear of any explosives so Blue Hens can safely attend sporting events.

“Since we’ve been on the street, she hasn’t disappointed me in her ability,” said Jetta’s handler, Corporal John Saville with UD Police.

The single-purpose explosive detection dog has gone through intensive 12 weeks of training with Delaware State Police’s K9 training unit. She’s also being trained in-house on article searches to discover evidence that may have been discarded during a chase.

“It’s repetitive odor recognition. The odors are hidden in boxes and cars,” Saville said. “From the very first day, she picked it up quickly and did very well with it.”

Jetta – and the entire UD community – have been fortunate:  she’s never discovered an explosive device on-campus. But if she did, until recently, she wasn’t exactly prepared for it to detonate.

Now, Jetta dons an added layer of protection in the form of a Kevlar sweater that was designed, manufactured and patented by Martha Hall, director of innovation of health sciences at the University of Delaware’s College of Health Sciences. The bright yellow, stretchy and thin, breathable sweater-like material is shrapnel- and stab-proof, providing UD’s K9s with a double aspect of protection.

“UD is the first in the world to have this new type of ballistic protection, which is really exciting,” Hall said. “Several companies have attempted to knit Kevlar. It’s incredibly, incredibly difficult. Most companies say the attempts have broken their knitting machines.” 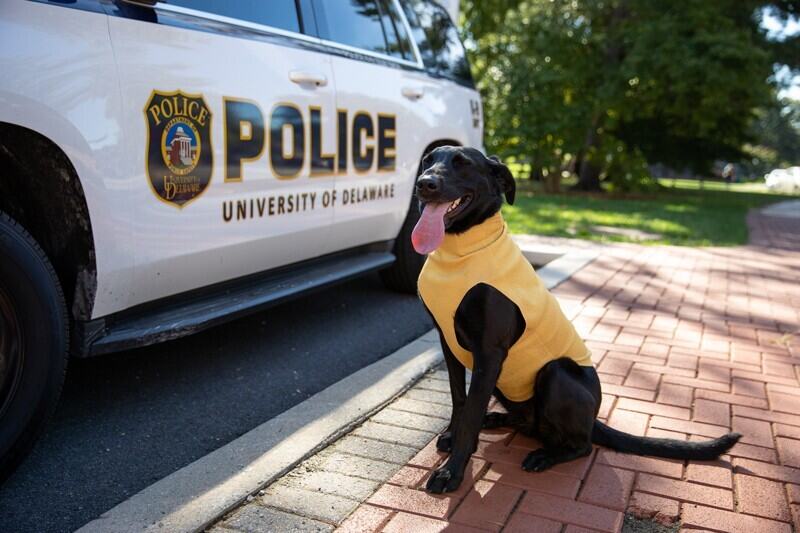 Hall initially wasn’t certain whether the Kevlar — being such a thin material — would stand up to shrapnel and stabbing during testing.

“When you have a projectile, intuitively, you’d think the knit would break,” Hall said. “But the strength of the yarn and the knit construction functions like a catcher’s mitt. It holds the material and bounces it back out. So, we’re going to see how far we can push it.”

Hall attributes their success, in part, to the “magic” of the Health Innovation Lab’s knitting machine, though she admits, they broke at least 1,000 needles during the process of designing the garment.

“But that was the diligence and perseverance that it took to come up with a solution,” she said.

A large chunk of the credit for developing this technology goes to Health Innovation Lab designer Marjan Ashrafi, Hall said.

“She’s detailed and focused,” Hall said of Ashrafi. “She calls the knitting machine ‘her baby,’ and she spent hours watching it knit to ensure every stitch was perfect.”

Jetta, the 3-year-old Labrador retriever, now wears the sweater daily, adding a pop of color to her shiny black coat and more protection than she’s ever had.

“It doesn’t bother her one bit. Putting it on is a slight struggle, but once it’s on, she doesn’t even know it’s there,” Saville said. “It’s far less intrusive than what we wear and doesn’t hinder the dog’s stamina, especially on hot days.” 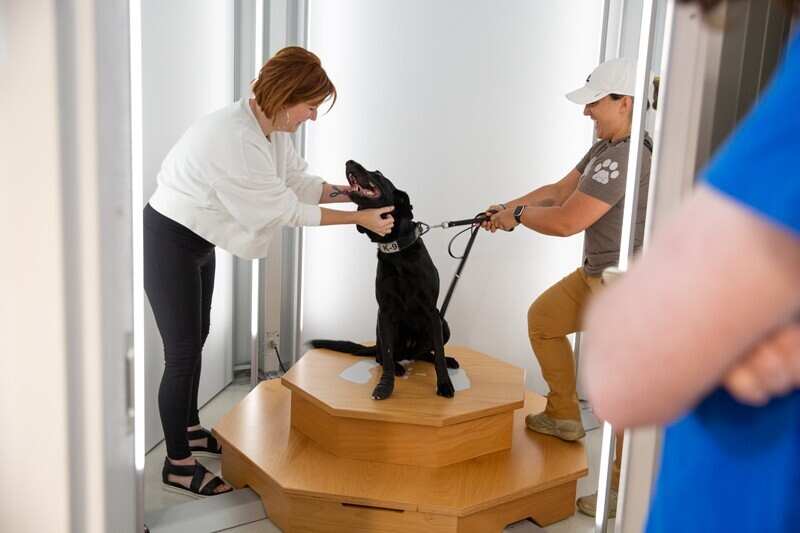 Innovation Director Martha Hall puts UD Police K9 Nellie and her handler master police officer Michelle Haney into the body scanner in the Health Innovation Lab so she can knit her a personalized Kevlar vest.

Saville called it a huge relief to know Jetta is safer on the job.

“Previously, she wore nothing to protect her from sharp objects,” Saville said. “K9s mean more to us than people might think. They’re closer than some family members, to be quite honest, and they’re with us 24/7, so knowing that she has a greater level of protection, it means the world to me.”

The development of the K9 Kevlar sweater is an offshoot of a larger project with the Department of Defense that’s still in the works to create a new form of ballistic protection for active-duty police and military.

“We’re thinking about how we can design, essentially, bulletproof long underwear for them,” Hall said.

But as that part of the project continues, Hall connected with UD’s K9 unit, and for the first time, a dog ended up in the Innovation Lab’s body scanner.

“It’s so exciting to expand the applications of the garment and the impact we can have on our local community to help the K9s that serve our campus,” Hall said.

Jetta is rambunctious and playful, so Hall and her design team had to tailor the knitted Kevlar turtleneck sweater to her needs.

“We had to keep in mind comfortability for her. We had to make sure it doesn’t distract her. If she’s too tuned into her sweater and not doing her job — that’s a problem. We also don’t want to overheat her,” Hall said. “In the application for dogs, we also had to consider that K9s need extra stab protection on their chest and belly. We wouldn’t necessarily think about that for humans, but for the dogs, this is the number one place they get hit.”

The Kevlar fibers retain heat, making the sweater a bit hot for Jetta in summer.

“It’s great for nine months out of the year,” Hall said. “Next, we’ll work with researchers at the University of Pennsylvania and their working dogs to try to identify their comfort level. Does their body temperature increase at a certain degree? Do they drink more water? Does their behavior change? We’ll be gathering data in these areas.” 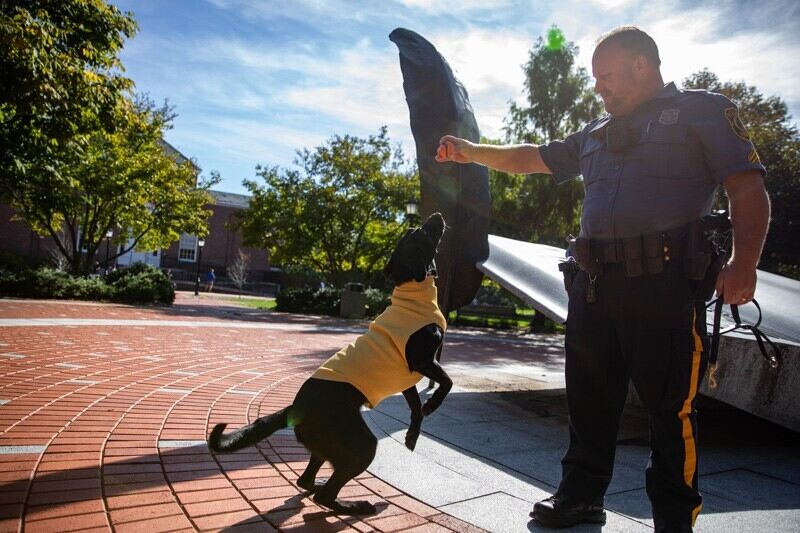 The custom-fitted garment is washable and is undergoing ongoing wear testing to ensure care is easy and that its properties and protection don’t get distorted. Ballistic testing on the device is also being conducted at NTS Chesapeake in Belcamp, Maryland, to see whether the Kevlar sweater can protect against 9mm and 40-gauge shotgun bullets.

“These tests will ensure that we have the optimum stitch pattern and optimum thickness to ensure optimal protection for first police K9s, and ultimately, officers,” Hall said. “We’re really hopeful that we can get this certification to give the dogs a full range of protection that will also be applied to the sweater once it’s developed for human use.”

The final product for humans will differ as it aims to better protect extremities — a vulnerability identified in the current style of bulletproof vests donned by officers. It will resemble thermal long johns that can protect against bullet penetration.

“Current bulletproof vests limit officers’ range of motion,” Hall said. “The weight and the way the vests sit on their body interferes with them doing their job. So, we want to create a garment that covers the extremities, is lightweight and more comfortable, and really helps them do their job better with them being less aware of their protective equipment. That reality will be so much better for the end user in every way, shape and form because it’s more comfortable and improves both performance and morale.”

All four of UD’s police K9s will eventually be decked out in Kevlar sweaters. Nellie, Shadow and Arya are in the process of being fitted for their very own protective knits. Master Police Officer Michelle Haney is a handler for 4-year-old Nellie, a black lab on UD’s police force.

“What if she gets sent in somewhere and something happens to her? I get choked up just thinking about it because we’re together all the time,” Haney said fighting back tears. “Her safety is one of my top priorities. I feel like I’d jump in front of something just for her. So, when I heard about this sweater that provides enhanced, lighter weight protection, I couldn’t wait for Nellie to get one. It means everything to me that she’ll be safer on the job.”

As Hall’s work continues to develop the innovative ballistic protection for humans, Saville is first in line.

“You have no idea how heavy our bulletproof vest is. They’re getting better and thinner, but they’re still heavy; they’re not breathable, and they’re cumbersome and uncomfortable, but we must wear it,” Saville said. “Having a vest that’s thinner but still provides protection that works would be life-changing.”

Haney was thrilled to hear she’ll also be getting a new form of protective gear.

“I was so impressed. It feels like a T-shirt, and I had no idea Kevlar could be made like that,” Haney said. “I’ve gotten used to what I have to wear and how uncomfortable it is but knowing they’re working on a garment that will make us more comfortable is nice to hear.”

Hall wants to eventually manufacture the device for commercial use but couldn’t put a price tag on just how much a Kevlar sweater would cost just yet.

“I’d love to have a program, where we provide the K9 Kevlar sweaters to police departments free-of-charge. Because of restrictions and because they don’t renew their protective equipment annually, it’d be great just to give it to them and say, ‘We value what you do, and want to see you stay safe on the job, so here’s another option for protection,’” Hall said.

For Hall, who’s designed all kinds of adaptive wearables for health reasons that help injured people heal faster or move better, this achievement stands out.

“With this garment, we’re trying to avoid injury in the first place. It feels exciting to move into the protective space and prevent injuries in an area where nothing like this garment exists,” Hall said. “It’s one of the most impactful projects I’ve worked on in my career. We’re creating something that will change lives and hopefully, save lives.” 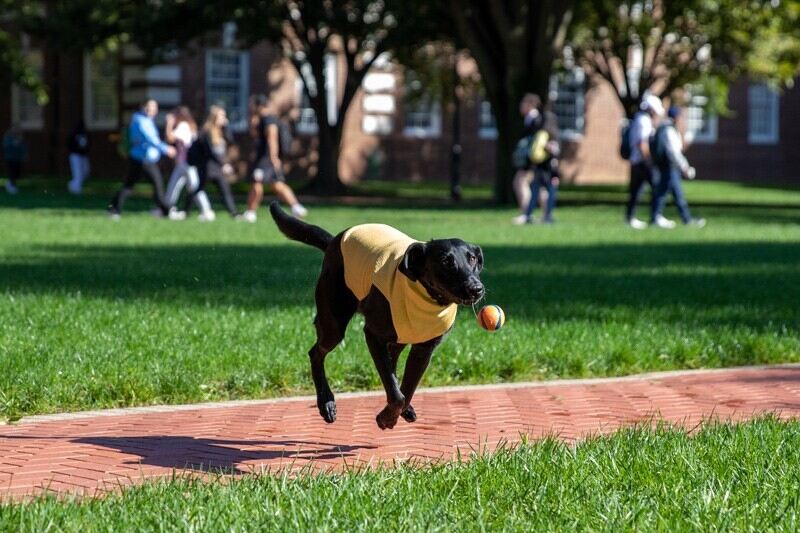 UD Police K9 Jetta is a highly-trained dog, but for many dogs, training or not, fetching a ball on a sunny day is a splendid activity.