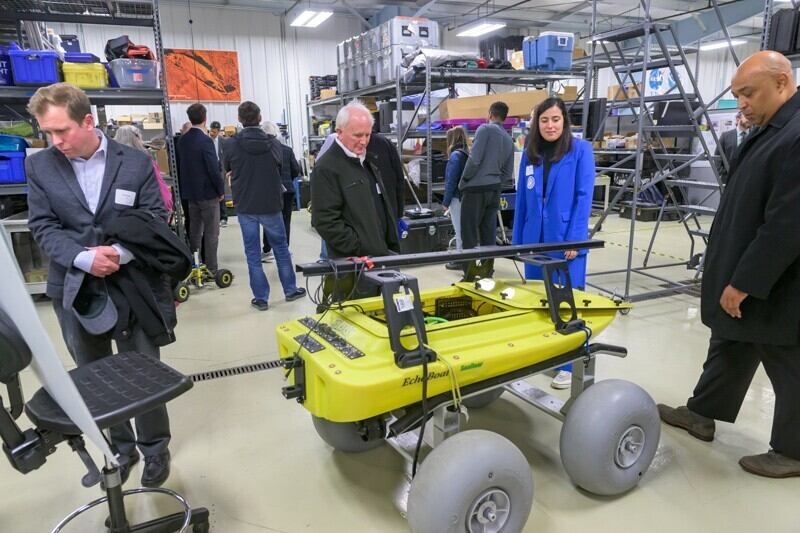 The University of Delaware’s College of Earth, Ocean and Environment (CEOE) was awarded a two-year, $1.3 million grant from NOAA to fund a program to make Delaware a leading national center in the application and development of autonomous systems, artificial intelligence and workforce development in support of advancing the Blue Economy.

For as many technological advances as humanity has made over the years, one area where our understanding is noticeably lacking is with regard to the world’s oceans. According to the National Oceanic and Atmospheric Administration (NOAA), more than 80% of the world’s oceans remain unmapped, unobserved and unexplored.

The University of Delaware will help train the ocean workforce of the next generation as well as test new sensors and marine robotics to further humanity’s understanding of the world’s oceans and improve environmental monitoring, defense and energy applications. UD’s College of Earth, Ocean and Environment (CEOE) was awarded a two-year, $1.3 million grant by NOAA to fund a project to make Delaware a leading national center in the application and development of autonomous systems, artificial intelligence and workforce development in support of advancing the Blue Economy.

Project Align, Build, Leverage and Expand (Project ABLE) is a collaboration between Delaware State University and the UD Center for Autonomous and Robotic Systems.

As Fabrice Veron, interim dean of CEOE, put it at the Project ABLE kickoff event, the Blue Economy can be defined in a few different ways.

For some, it can mean any economic activity driven or made possible by the ocean. For others, the Blue Economy is a variation of the Green Economy, implying not only marine-driven economic activities but also work that will help humanity live in a more sustainable way — such as through offshore wind power.

Veron said he takes a broad view when it comes to the Blue Economy.

“From our perspective, there is no separating the ocean from the global environment,” said Veron. “Project ABLE represents an effort to connect industry and government with the expertise of our faculty and students, and this new initiative will set us on a path to creating an incubator for the Blue Economy right here in Sussex County, and the state of Delaware as a whole, as we build a dynamic place for innovation that will reach out to the Atlantic Ocean and far beyond.” 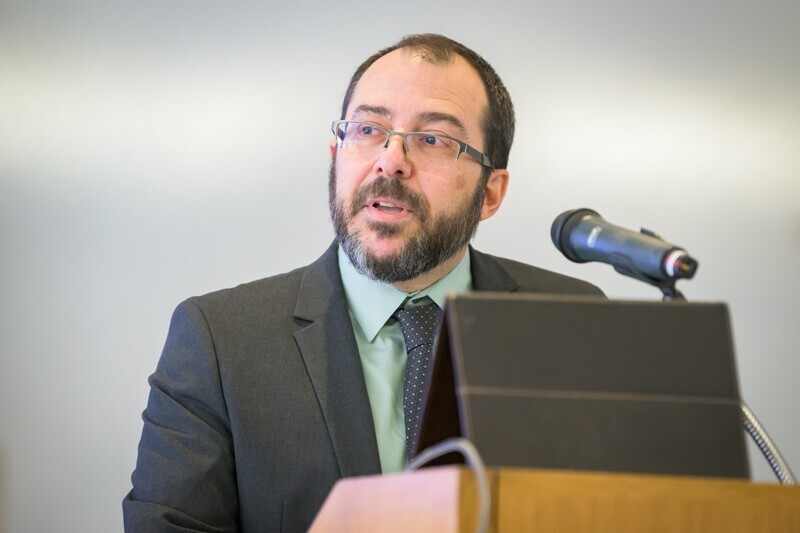 Fabrice Veron, interim dean of CEOE, spoke at the kickoff event saying, “Project ABLE represents an effort to connect industry and government with the expertise of our faculty and students.”

Project ABLE was awarded federal funding through a Congressionally Directed Spending Request — commonly referred to as an earmark — that was obtained by U.S. Senators Tom Carper and Chris Coons and Rep. Lisa Blunt Rochester (all D-Del.) The project will look to create new jobs and increase knowledge and stewardship of the coastal environment through the use and development of CEOE’s advanced autonomous systems and sensors in an effort to train the next generation of BlueTech innovators.

All three gave remarks via video for the Project ABLE launch.

“It wasn’t that long ago that UD’s team gave me a tour of their autonomous vehicles and robots, and I have to say that the work that is going on there is fascinating,” said Carper. “This program is already well on its way to leading our country in coastal research, but this center isn’t only research focused — it is workforce focused as well. This center is a training ground for our future workforce.”

Coons said that the project will have a positive impact on Delaware and the state’s economy.

“The continuing research will have an impact on issues as diverse as climate change, energy and our ecosystems,” said Coons. “I’m particularly excited about how these same technologies might have direct applications across the spectrum of the Blue Economy on issues including national defense, aquaculture, fisheries, resource and coastal zone management.”

Blunt Rochester said the project is a win for the state all around, as it will innovate with sustainability in mind, drive workforce development and training in areas such as engineering and renewable energy, and create highly skilled jobs throughout southern Delaware.

“Delaware is the perfect fit to host this innovative technology given its proximity to the ocean and bay,” said Blunt Rochester. “Project ABLE has the potential to revolutionize how we use technology for environmental research around our coast, from protecting our oceans to finding ways to utilize our vast natural resources in a responsible way that supports coastal economies everywhere.” 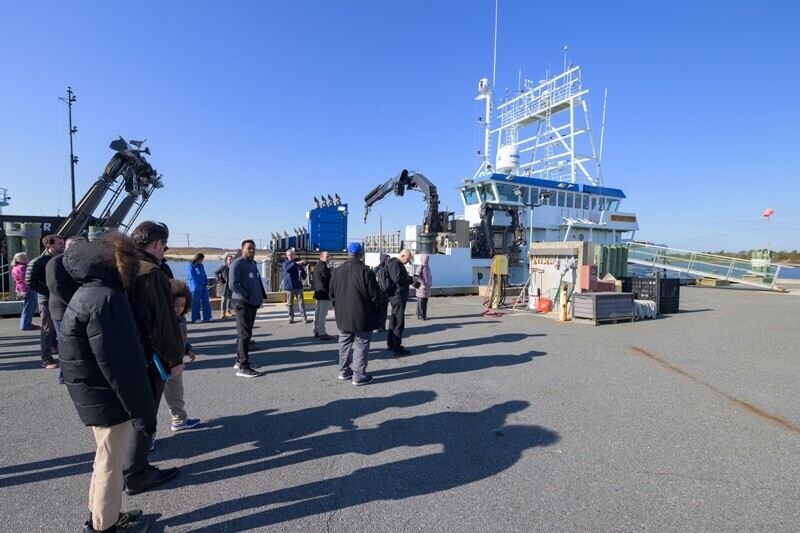 During the kickoff event for Project Align, Build, Leverage and Expand (Project ABLE), guests were given a tour of UD’s facilities, including the Robotic Discover Laboratories and the harbor.

UD President Dennis Assanis also provided a video address for the event, saying “it is critical that we better understand our marine environment and learn to harness its power and potential both safely and effectively. Project ABLE will help us educate the workforce, especially in southern Delaware, that will design, build, operate and maintain the infrastructure.”

Art Trembanis, professor in CEOE’s School of Marine Science and Policy and UD’s lead researcher on the project, said that the robotics systems the University has been working with and developing for years will be a great asset to train the next generation of the Blue Economy’s workforce.

He also noted that there is a misnomer when it comes to how people interact with advancing technology and autonomous systems. Many people seem to think the systems mean that fewer humans will be needed for work. Instead, it means that there is a greater need for people to work with robotic systems.

“The reality is, you need as many people or more people. You need people who can build, assemble and operate the systems and work from the data off of it,” said Trembanis. “It’s not a diminution of human activity, it’s a conversion of it so that it’s safer — we’ve sent some robots offshore in pretty harrowing conditions — and more carbon neutral. We’re trying to drive more technology to the oceans to help increase our knowledge of the environment, which will help us increase our stewardship of it as well.”

Dewayne Fox, professor at DSU’s College of Agriculture Science and Technology, is the lead on the project from DSU.

The kickoff event also featured remarks from Clytrice Watson, associate provost for academic and student affairs at DSU, and Kurt Foreman, president and CEO of the Delaware Prosperity Partnership, which is also providing support for Project ABLE.

After the speakers, guests were given a tour of UD’s facilities, including the Robotic Discover Laboratories and the harbor. In the afternoon, there were two workshops facilitated by Kirsten McGregor, president and founder of Sagax Associates who specialize in helping develop strategies for blue economic development with resiliency in mind. The workshop discussions focused on identifying the challenges and opportunities presented by Project ABLE and brainstorming its initial activities.

The next phase of the project will focus on monthly activities such as workshops, training programs, technology testing and research efforts that will advance the goals of Project ABLE. 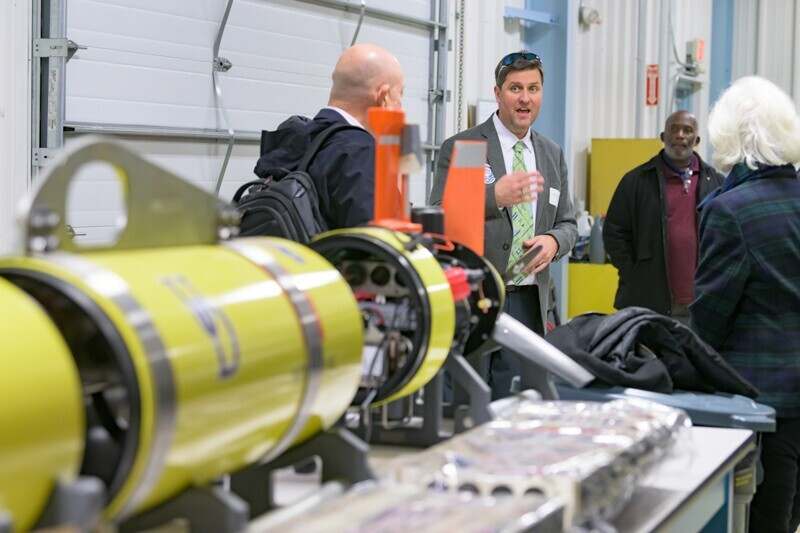 During the kickoff event for Project Align, Build, Leverage and Expand (Project ABLE), a collaboration between Delaware State University and the UD Center for Autonomous and Robotic Systems, visitors were given a tour of the Robotic Discovery Laboratories.