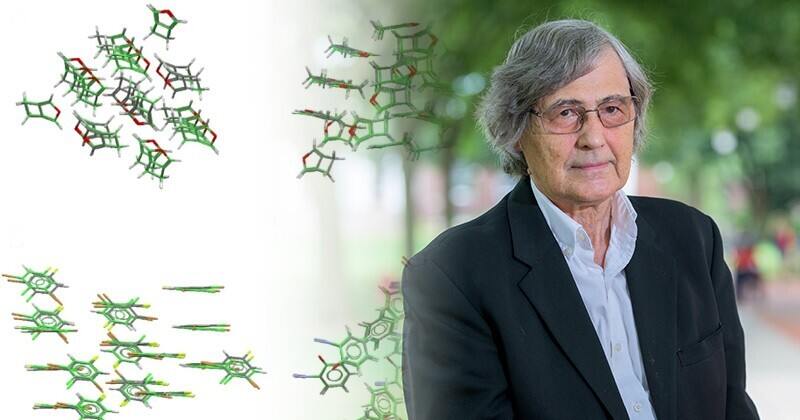 UD’s Szalewicz and Nikhar use quantum mechanics to improve predictions

Developing and manufacturing effective, safe, reliable new drugs or critical new materials for use in semiconductors or applications involving dangerous materials requires many layers of knowledge.

You need to know which molecules are best suited to the mission, what formation they will take when assembled and how this form might change in the manufacturing process. You also need to know whether those changes will affect their ability to perform as desired.

In a recent publication of the journal Nature Communications, University of Delaware Prof. Krzysztof Szalewicz, an expert in molecular behavior, and graduate student Rahul Nikhar explained a promising new approach to predicting the structure of crystals that could reduce the cost and increase the reliability of such predictions.

Crystal structures are common and familiar to us in substances such as salt, ice and sand. Scientists define them by their regular patterns and symmetry — the way the atoms and molecules are organized — but most atoms and molecules can crystallize in several forms, called polymorphs. Diamond and graphite are polymorphs of carbon, for example. Some molecules can crystallize in as many as a dozen or so different forms, Szalewicz said.

“Investigations of crystal structures are an important field of science as evidenced by 15 Nobel prizes awarded for research on crystals,” he said.

Measuring those structures is routinely possible using X-ray diffraction techniques, but accurate, theoretical predictions of how crystalline structures will form and behave are critical to preventing unintended and undesirable results in many applications.

These predictions of structure and stability are no easy task, though.

The analysis starts with a two-dimensional graph of a molecule. Next, three-dimensional conformations are mapped by determining all of the possible shapes this molecule could take around various chemical bonds. Then hundreds of thousands of plausible crystal structures are generated and the most stable are selected by their lattice energy, the energy that causes the crystal to bind.

Lattice energy is the sum of the energies resulting from interactions between atoms or molecules in a crystal, Szalewicz said.

This interaction energy can be computed using quantum mechanics, Szalewicz said, and extends to the interactions between molecules.

These regions of attraction and repulsion represent potential energy surfaces — force fields. Once the force field is known, Szalewicz said, the lattice energy can be calculated by adding up the interaction energies of all the molecules in the crystal.

Until recently, though, these computations were too expensive to use extensively. Accuracy was limited and there was no method to improve the calculations.

The approach developed by Szalewicz and Nikhar uses the equations of quantum mechanics, without need of experiments.

The method developed did away with the need for months of computation and effort, expanded the range of molecules for which predictions could be made, dramatically reduced the cost and increased the reliability of the predictions.

The new developments include the use of a method created by the Szalewicz group, known as symmetry-adapted perturbation theory (SAPT), along with the creation of an automatic and reliable method of generating force fields (called autoPES), which requires minimal human involvement and was developed by Mike Metz, another grad student in the Szalewicz group. Metz won the 2020 Theodore Wolf Prize for this work.

The approach then uses these force-field calculations to minimize lattice energy and, finally, applies quantum mechanics calculations for the whole crystal to make final refinements and rank the polymorphs.

“This should increase the reliability of predictions and may become a leading method in developments of novel crystalline materials,” Szalewicz said.