How I Teach — Philosophy 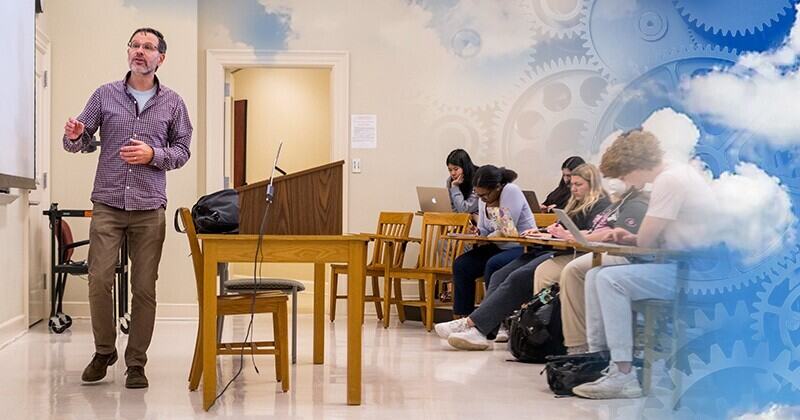 Seth Shabo, associate professor of philosophy, said the skills learned in his Introduction to Philosophy course are applicable in myriad ways. “Philosophy, if you think of it as a territory, shares borders with almost everything else that's interesting,” he said.

Editor’s note: First-year students, prospective students (and some of their parents) wonder and worry how they will handle the academic transition from high school to college. In a series of stories, UDaily speaks with University of Delaware professors who teach courses commonly taken by students during their first year on campus. The series includes professors who teach biology, writing, business, calculus, political science and sociology, and those stories can be read on the How I Teach website. In this story, Associate Professor Seth Shabo explains his approach to teaching introductory philosophy.

In his 1802 book Natural Theology, the English clergyman William Paley describes a scene in which a person stumbles upon a watch in a forest and wonders about its origin. Did the watch appear completely by chance in the same way that, say, a stone or a branch would? Or had someone planned it, as an engineer would?

Just as a watch is “framed and put together for a purpose,” Paley reasoned, the complexity of nature couldn’t happen by chance. As a watch is the design of a watchmaker, nature is the product of intelligent design — or a God.

The existence of a God is one of three main topics Seth Shabo, associate professor of philosophy at the University of Delaware, discusses in his “Introduction to Philosophy” course, and Paley’s watch analogy is one of the many arguments students study. Throughout the semester, students will also delve into the topics of free will and persons and bodies, subject areas in which many first-year students have never before studied.

“One of the really gratifying things about teaching an intro to philosophy course is that you see students being prompted to use abilities that they were never prompted to use before — and maybe that they didn't really know they had,” Shabo said. “There's a little bit of an adjustment period at the beginning, but they're able to find that they can think in this analytic way, and that allows them to approach these topics that many of them find interesting.” 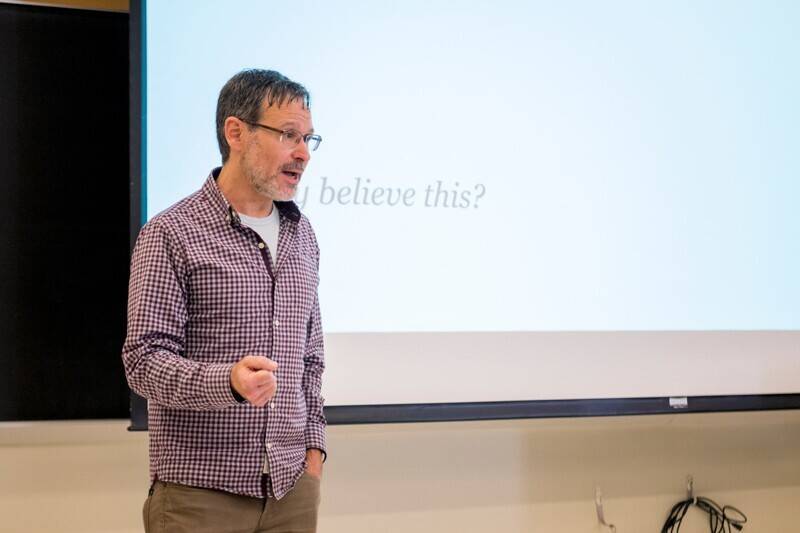 “There's no other discipline that allows you to ask foundational questions that have bearing on so many other things,” Prof. Seth Shabo said of studying philosophy.

Most students enrolled in the course are first-year students who more than likely won’t go on to major in philosophy, but the values of the course extend into other subject areas. Indeed, Shabo said that when he was an undergraduate student he didn’t think he would pursue a major, let alone a career, in philosophy. He said he initially took his first course because he thought the skills learned — critical thinking, communication, public speaking and problem solving, among others — would be applicable in myriad ways.

“Philosophy, if you think of it as a territory, shares borders with almost everything else that's interesting,” Shabo said. “Philosophy shares borders with physics, with artificial intelligence, with political theory, with mathematics, with science, with ethics, with public policy. There's no other discipline that allows you to ask foundational questions that have bearing on so many other things.”

Marie Freebery, a junior biology major who took the class her freshman year, said the class was very different from her science, technology, engineering and math (STEM) classes, in which there are usually very strict right or wrong answers when it comes to exams and assignments.

“A lot of the topics that go along with philosophy have to do with things that you can argue without having a right or wrong answer, and as long as you prove your point in an educated way, then you can make any argument you want,” she said. “With numbers, with math, with biology — if it's not exactly right, then it's wrong. I liked how in philosophy I could use the other part of my brain.”

Emma Crowell, a junior political science and public policy double major, initially took the introductory course to satisfy a breadth-of-curriculum requirement, but she enjoyed the class so much that she decided to minor in philosophy. The classes she’s taken so far, she said, have helped her in other subject areas.

“I think it's a good exercise in learning how to think about problems that you would encounter in any area of study, because it forces you to zoom out and see the big picture,” she said. “It reminds me to think critically about ideas that I encounter in all subject areas. For me, more specifically, with political science and public policy, I feel like it's very relevant in thinking about how to serve communities and serve people. I think it’s relevant to any career that involves interacting with people and working toward a universal goal.”

In all of his classes, Shabo said he tries to foster a sense of community in which students feel comfortable saying what they think and trying out ideas. Indeed, one of his instructions is “don’t worry about what anyone else thinks — just do your best to figure out what your own view is.” He stresses the quality of reasoning over the conclusion students arrive at.

“Reasoned disagreement is a really tremendous catalyst for intellectual growth, and that growth requires being able to question your own assumptions,” Shabo said. “And to really question your own assumptions in the way that you need to to be an independent thinker — maybe it sounds paradoxical — but you need other people who are open minded, who don’t share those assumptions, who you can talk to. And so I try to foster that ethos in my classes.”

The University of Delaware empowers all Blue Hens with the skills and strategies they need to succeed.

UD students in any major are encouraged to take advantage of a range of peer tutoring services, as well as comprehensive skill-building resources offered by the Office of Academic Enrichment (OAE). Most services are available free of charge. To learn more, visit the OAE website. Students may also utilize the Blue Hen SUCCESS platform to connect with their academic advisor or access additional resources on Advising Central.

For UD’s community of educators, the Center for Teaching and Assessment of Learning (CTAL) offers programs, workshops and confidential consultations to support faculty as they develop and achieve their pedagogical goals. UD instructors at every stage of their career are invited to explore online and contact ctal-inf[email protected]

How I Teach — Series

The How I Teach website provides a collection of the stories in this series.