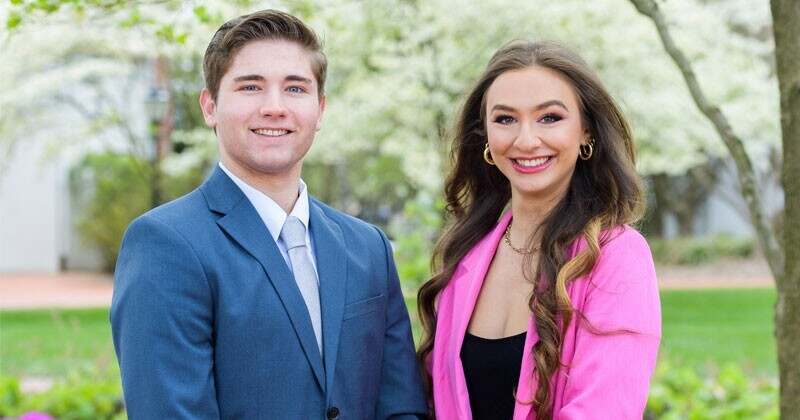 The University of Delaware Alumni Association (UDAA) has announced the 2022 recipients of the Emalea Pusey Warner and Alexander J. Taylor Sr. Awards for Outstanding Seniors, honoring two high-achieving seniors in the Class of 2022: Valerie B. Light and Jonathan L. Martin.

Each year, the Warner and Taylor Awards are given to seniors who demonstrate leadership, academic success and community service. Students must also have a cumulative grade point average of 3.5 or higher at the end of the first semester of their senior year.

After immersing herself in the industry, she noticed that the beauty market lacks inclusion and she has since made it her priority to change that. When Light became the beauty director and subsequently the editor-in-chief of UDress, UD’s student-run fashion and beauty print publication, she took advantage of that opportunity to welcome more inclusivity into the publication.

“One of my earliest strides was that I launched the first photoshoot with men wearing makeup,” Light said about pivoting the publication’s brand to redefine beauty and fashion and embrace diversity and inclusion. “I have partnered with registered student organizations to infuse the magazine with new voices. Writers now share their pronouns, models represent our diverse student body, and our new direction emphasizes self-expression for all.”

“Ms. Light has the ability to take a registered student organization of this size and scale it down so that everyone finds a place within it,” said Alex Keen, assistant director of University Student Centers. “She recruited from classes to encourage early career development, expanded team sizes to allow for more involvement, and staffed the executive board previously operating at 30% capacity.”

In addition to her efforts with UDress, Light took an internship with Fat Mascara, a top beauty podcast, in which she hosted episodes, wrote segments, booked prominent guests, managed the social media presence and became known as “Southern Correspondent Val” (Light is from Georgia).

“Throughout my 22-year career in journalism, I’ve mentored hundreds of interns — and Val is one of the most promising students I’ve ever worked with,” said Jennifer G. Sullivan, co-host and producer at Fat Mascara. “Valerie proved to be such an engaging and informed public speaker that we ended up giving her a recurring role on the show, and she quickly became a fan favorite. Perhaps most importantly, Val spoke on air (to our global audience of about 130K listeners) about how her studies and the extracurriculars she was involved with at the University of Delaware were the reason she was so well prepared for every podcast she appeared on.”

Light’s love for UD also shone through in her time as a Blue Hen Ambassador student tour guide — she even orchestrated the transition from on-campus to virtual tours — and as a move-in volunteer for Freshman Fest for Jewish first-year students every fall, when she met with incoming Jewish communication majors to give them insights about the program. Light is a member of Sigma Kappa and became a Rho Gamma recruitment counselor as she volunteered her time to give advice to women going through recruitment. She also continued in a mentorship role for new students by serving on panels for University 101 classes.

Always taking advantage of learning opportunities, Light became a UD summer scholar in 2021. During the program, she explored how U.S. cosmetics and beauty companies responded to the pandemic, utilizing the data tool Stylesage.

“Stylesage’s leadership team was amazed by Valerie’s work, and they later featured her research on their website,” Lu said.

Outside of UD, Light was a counselor at an immersion camp for children who have autism.

After graduating with her Honors degree, Light plans to move to New York City to pursue a path in the beauty industry, and she credits the interdisciplinary education she received at the University of Delaware with the ability to achieve her dream since she was a young girl.

Jonathan L. Martin is a nutrition and medical sciences major with a minor in biological sciences and medical diagnostics. He volunteers 36–48 hours each week as an operations coordinator, quality assurance officer and emergency medical technician (EMT) for the UD Emergency Care Unit, a collegiate volunteer ambulance organization (under the UD Police Department) that provides emergency medical services for UD and the surrounding areas of Newark. Additionally, he also serves as an EMT for Mill Creek Fire Company and Aetna Hose, Hook, and Ladder Fire Company.

“As an experienced EMT, ambulance driver and member of the command staff, I lead the 60 members of the University of Delaware Emergency Care Unit (UDECU),” Martin said.

During his shifts, he acts as a field training officer, providing teaching, advice, mentorship and sometimes comfort to newer student EMTs during times of stress and uncertainty throughout their training process.

“Jon has been a very active member [of the UDECU] operationally and administratively, all while balancing the life of being a University student,” said Robin Tsang, director of EMS at UDECU. “Jon has proven that he is resourceful, passionate, focused and a vital asset to the organization and its mission.”

Martin immersed himself in the UDECU in the height of the COVID-19 pandemic — instead of shying away from the added stress and risk while facing an unpredictable virus during his college years, he faced it with courageous service and remarkable leadership, as noted by Sandra Baker, assistant professor of behavioral health and nutrition.

“Jon’s generosity of time and abilities is far reaching,” Baker said. Martin became a Peer Mentor for an introductory course she teaches, which consisted of 110 students. “He not only did an excellent job in leading his mentor group which was challenging in a virtual format, he was one of my ‘go-to’ Peer Mentors who was always willing to assist me with additional tasks in order to make the class a good experience for all students. I find Jon is able to be ‘others focused,’ which is a rare quality in today’s world and one that will make him an excellent, patient-centered physician and representative of UD.”

Martin has volunteered at Penn Medicine’s Lancaster General Hospital where he shadowed several physicians in surgical, nephrology and emergency room settings. He has been working closely with Sheau Ching Chai, principal investigator of UD’s Chai Nutrition and Health Research Laboratory, as he has pursued an Honors thesis for the last few years. He also served the surrounding community through creating nutrition resources for elderly Delawareans, working with groups to create activities that will be used in 18 senior centers throughout the state.

In January 2020, Martin took his service and learning in the medical field abroad as he studied international healthcare in Lisbon, Portugal.

“This experience broadened his perspective and is undoubtedly one of the reasons that he is a mature young man able to work with individuals from a variety of backgrounds,” Baker said. “I believe he is prepared to make an impact globally.”

Alisha Rovner, assistant professor of health sciences, said, “I have interacted with thousands of undergraduate and graduate students, and Jon is in the top 1% of all the students with whom I have worked in my career. Although Jon’s academic accomplishments are noteworthy, what I find the most impressive about him is the quality of his character. Jon has a desire to give back to others.”

Martin is also involved in several campus organizations, including pre-medical fraternity Phi Delta Epsilon and University of Delaware Sports Performance Nutrition Center, where he assists UD athletes in fueling properly for maximum performance. He also serves as a personal tutor for the Office of Academic Enrichment and has represented the nutrition and medical sciences major at UD’s Decision Days and Blue and Gold Days on multiple occasions.

After graduating with an Honors Degree with Distinction, Martin plans to attend medical school at Sidney Kimmel Medical College at Jefferson University.

To learn more about the UD Alumni Association’s Warner and Taylor Awards, past recipients, and more awards offered through the Office of Development and Alumni Relations, visit the Scholarships and Awards webpage.