News from University of Florida Health 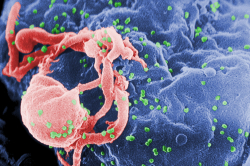 JUPITER, Fla. —  Researchers at The Herbert Wertheim UF Scripps Institute for Biomedical Innovation & Technology​ have discovered a protein that appears to play a key role in helping HIV replicate in human immune cells, providing more clues about how cellular machinery allows the virus to create new copies of itself.

The insight is more than scientific curiosity — the protein, called p32, might one day provide a potential target for drugs that keep HIV dormant and harmless.

That could eventually lead to what would essentially be a cure for HIV and thus AIDS.

“p32 is one piece of the puzzle,” said Susana Valente, Ph.D., a professor at The Wertheim UF Scripps Institute and chair of its department of immunology and microbiology. She is the senior author of a paper on p32 published Dec. 30 in the Proceedings of the National Academy of Sciences, a peer-reviewed scientific journal.

“This adds another layer of complexity to understanding HIV,” she added. “We need to identify all of these unknown factors that help HIV replicate itself, and ultimately some of them can be targeted in the future by drugs.”

When HIV infects an immune cell, it can remain dormant for years. If untreated, viral loads eventually increase and weaken the immune system to the point where it cannot ward off infection and disease. This final, terminal stage is AIDS.

Antiretroviral therapy, or ART, can keep HIV loads low so the patient does not progress to AIDS. But this requires a daily drug regimen that lasts a lifetime. HIV, however, still lingers in cells and causes low-level inflammation. This can potentially put patients who have HIV at greater risk for diseases of the cardiovascular system, kidney, bones or liver as well as for diabetes, cognitive disorders and some types of cancer, even when they do not progress to AIDS.

ART is not a cure for HIV but allows it to be controlled as a chronic disease. However, if therapy is interrupted, viral loads will again climb to dangerous levels.

Some HIV researchers have focused on a “shock and kill” strategy to eradicate the virus and move beyond ART. This involves using drugs to awaken dormant HIV-infected cells, where they had been invisible to the immune system.

Once activated, the immune system can then attack and destroy cells carrying the virus.

That goal, however, remains elusive, Valente said, because it has proved difficult to reawaken and destroy every copy of the virus in the body without severe side effects. All it takes is one infected cell for HIV to propagate anew. 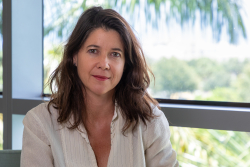 Valente has instead pioneered a “functional cure” strategy called “block and lock,” an approach that blocks reactivation of HIV in dormant cells without eradicating them, then locks them in that quiescent state.

This is where another important protein, Tat, comes into play.

Tat is a regulatory protein that can boost the cellular assembly line that replicates the virus so it can, in turn, spread and infect additional cells. Eliminate Tat, Valente said, and you might lock HIV into a perpetual state of dormancy.

“Without Tat, you have a very weak virus,” she said.

p32 also interacts with Tat, helping to stabilize it, which might make p32 as good a target as Tat, Valente said. p32 might serve as a hub where other proteins associated with HIV replication can dock.

“It basically stabilizes the whole complex,” she said.

Valente earlier discovered that cortistatin A, a natural molecule isolated from a species of marine sponge, is powerful in its ability to disrupt Tat activity, leaving HIV dormant.

In her latest study, she also confirmed that cortistatin A can interfere with the interaction of Tat with p32 as well.

“‘Block and lock’ is not eradication of HIV,” Valente said. “The virus is still there. We’re just putting it to sleep like the harmless endogenous retroviruses that make up 8% of our genome.”

These retroviruses are ancient bits of virus that have worked their way into our genetic code but, through thousands of years, have been rendered useless, like a dilapidated car in a junkyard.

Valente and The Wertheim UF Scripps Institute are part of an international, multidisciplinary group of researchers who won a $26.5 million grant last year from the U.S. National Institutes of Health to further investigate the “block and lock” strategy.

There is still much to learn about HIV and the large army of cellular players that assist its ability to propagate and prosper in the human body, Valente said. Proof of a functional cure in humans is still uncertain and years from reality, even if all goes as hoped.

“I am optimistic we can get to a functional cure, with this silencing approach,” Valente said. “This new paper is not the cure for HIV. We’re not there yet. But every little step brings us closer.”