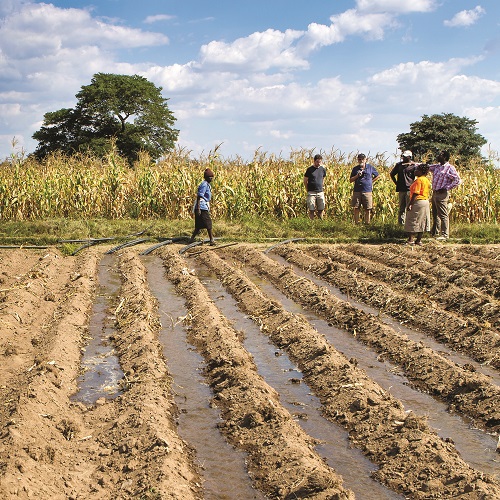 The University of South Australia’s contribution to an international social enterprise project, which has supported more than 15,000 farm businesses in sub-Saharan Africa, has been recognised by the European Foundation for Management Development (EFMD).

UniSA  took home an EFMD Excellence in Practice Gold Award in the Ecosystem Development category on 19 May for its work on the project ‘Transforming Irrigation in Southern Africa’ (TISA), which was established in 2013.

UniSA Business Executive Dean Professor Andrew Beer says UniSA is honoured to be recognised in the awards, which showcase some of the most innovative and impactful partnerships being driven by business schools around the world.

“The award highlights the complex learning and development project UniSA has worked on in collaboration with international partners, which has transformed irrigation farm businesses and their irrigator corporations from dysfunctional to profitable business enterprises,” he says.

“As a result of the project, the profitability of the small farm businesses and their irrigator corporations has increased significantly, leading to an improvement in farmers’ livelihoods, food security, nutrition, education and prosperity.

“It’s a wonderful example of research with significant global impact, where our researchers have worked together across disciplines to provide enterprising solutions that support inclusive and sustainable communities globally.”

The project used a two-pronged approach to conduct a learning and development intervention in sub-Saharan Africa, where approximately 80 per cent of food is produced by small farm businesses often within small-scale irrigation schemes operated by the irrigators or as irrigator/government partnerships.

Research Professor in Water Policy and Management Henning Bjornlund leads UniSA’s contribution to the project, driving the development of the AIPs.

Prof Bjornlund says the farmers and corporations have traditionally addressed challenges individually and in isolation, an approach that has largely failed as the challenges are complex and interconnected.

“We introduced AIPs as a way for farmers, irrigation corporations and governments to collaborate to find solutions and then implement them on a wider scale,” he says.

“Since the project’s inception, the profitability of the small farm businesses and their irrigator corporations has increased significantly. Farmers now see themselves as transitioning from subsistence farming to ‘being in business’.”

EFMD is an international non-profit, membership-driven organisation, which is recognised globally as an accreditation body for business schools, business school programmes, and corporate universities.